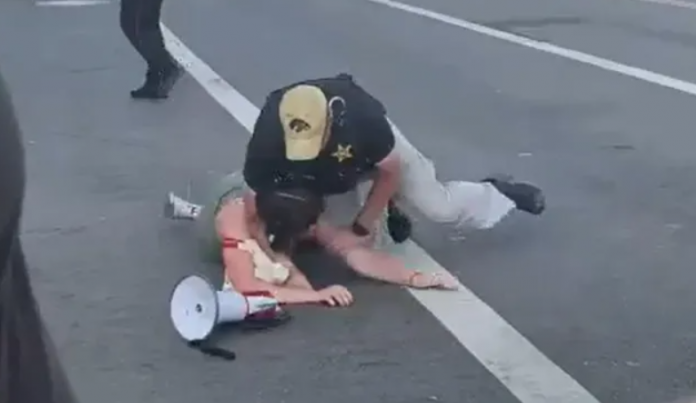 The Secret Service apprehended a protester in Los Angeles on Wednesday after she came out onto the street and approached President Biden’s convoy.

Biden attended the ninth Summit of the Americas in downtown Los Angeles. With a bullhorn, the woman walked onto a blocked-off street and was immediately removed.

The demonstrator looked to be pushing for abortion rights when she resisted authorities during her arrest and took off the tackling officer’s cap and glasses.

Chief of communications for the United States, Anthony Guglielmi Following the arrest, the Secret Service issued a statement.

An adult female entered a restricted lane along a motorcade route on Chick Hearn Ct in Los Angeles just after 5 p.m. A US Secret Service member quickly pulled the lady off the street and took her into arrest as she approached passing automobiles. The motorcade movement and our protectees were unaffected. This incident is still under investigation.

Biden believes that a woman’s freedom to choose is important. The Supreme Court of the United States, on the other hand, appears set to overturn Roe v. Wade.

The Organization of American States’ Summit of the Americas, which began in 1994, brings together countries in the Western Hemisphere to promote pro-democracy ideals and cooperation among heads of state and leading enterprises with influence in the area.