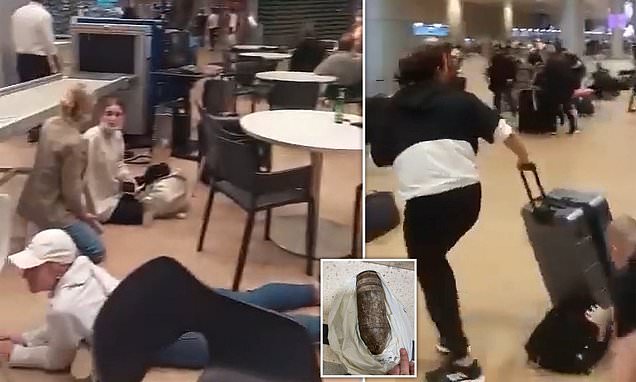 This is the horrifying moment a family attempted to carry a fragment of an unexploded bomb through security at an Israeli airport.

After the alarm went off in the departure lounge at Ben Gurion Airport in Tel Aviv, passengers scrambled for the exits.

When security personnel saw the large undetonated shell fragment, they assumed the family was terrorists and ordered an emergency evacuation.

Despite warnings to depart the terminal cautiously, the alert sparked a stampede as hundreds of people dashed in all directions.

‘There was a lot of yelling,’ one injured eyewitness stated. I simply felt compelled to flee for my life.’

He’d jumped onto a luggage conveyor belt and then collapsed. Following weeks of terror strikes in Israel, the false alarm was sent. Four separate events occurred within 16 days earlier this month, killing 14 people. A lone Palestinian gunman killed three people outside a Tel Aviv nightclub. Hours later, he was shot and murdered by police.

‘When they arrived to check their bags, they revealed the fragment of the shell to security,’ Israel’s Airports Authority stated.

‘Because it was a chunk of a shell, the area was ordered evacuated.’

The unexploded bomb fragment was found in the disputed Golan Heights region between Israel and Syria by an American youngster.

The source of the shell fragment is unknown, although it might have come from an Israeli, Syrian, or even ISIS bomb.

The threat of a terrorist assault was quickly dispelled, and boarding continued. The family boarded their aircraft as usual, but the shell had to be left behind.