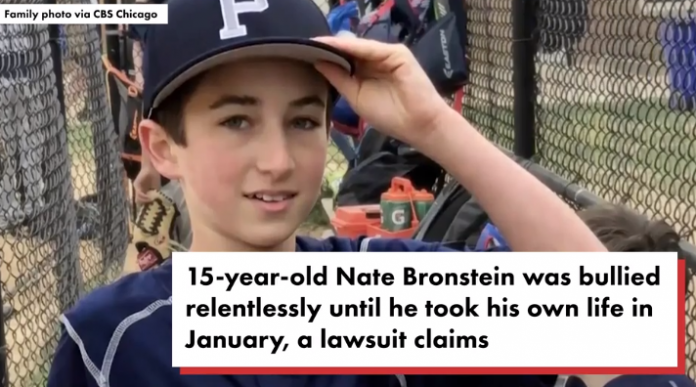 A complaint says that a 15-year-old kid was ridiculed repeatedly until he committed himself in January after being targeted by a false rumor that he was unvaccinated.

The lawsuit, filed Monday against the Latin School of Chicago, claims that officials at the private college prep school, which charges more than $40,000 per year in tuition, failed to halt the bullying on purpose.

The school, numerous workers, and the parents of the accused bullies were listed as defendants in the Cook County petition. N.B., a late adolescent, was arrested. According to the lawsuit, moved to the school because of its in-person learning during the coronavirus outbreak.

According to the lawsuit, a kid whose parents are implicated in the case began spreading rumors that the 10th-grader, Nate Bronstein, was unvaccinated.

According to the lawsuit, the abuse escalated after Nate was informed in class by a teacher that he was going nowhere in life.

According to the lawsuit, the boy was also cyberbullied on Snapchat, where another classmate encouraged him to commit suicide in mid-December.

Nate visited with a school supervisor at that time, but his parents claim that none of the children participating in the cyberbullying were reprimanded.

According to the complaint, Rosellene Bronstein had also approached a counselor about the bullying, expressing concern that her son would harm himself, but the school dismissed her worries as family issues.

Nate’s mother allegedly phoned the school over 30 times in October and November alone, but administrators allegedly ignored the family’s requests for assistance. According to the complaint, the boy reportedly reported the bullying to a school dean, who ignored him.

On Jan. 13, one month after another student on Snapchat encouraged Nate to commit suicide, his father discovered him hanging from a noose strung to a shower in the family’s bathroom.