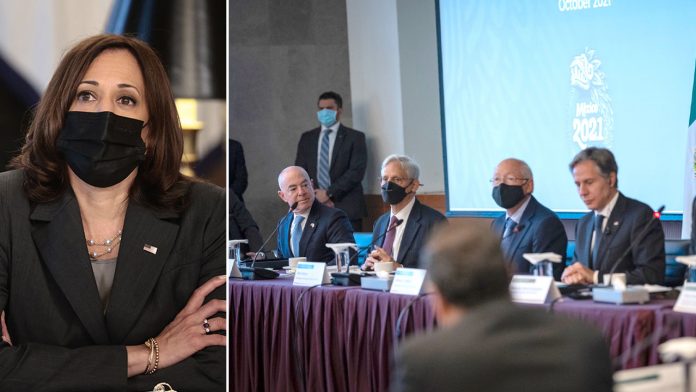 Vice President Kamala Harris was again absent from action Friday, as President Joe Biden had placed her in charge of the southern U.S. immigration crisis.

Fox News reports that Harris moved in the opposite direction to New Jersey while officials from the Biden administration met with Mexican officials regarding the southern border security policy.

On Friday, top U.S. officials and Mexican officials met in Mexico City. The meeting was held to discuss security at the U.S.-Mexico frontier.

Since Biden arrived in the White House, the border has seen more than 1.5 million illegal crossings. He quickly reversed many of Trump’s immigration policies.

Warnings have been issued about a major influx of migrants expected to occur in the last months of 2021.

The meeting was attended by many of the top officials of the Biden administration, including Secretary of State Antony Blinken and Homeland Security Secretary Alejandro Mayorkas.

Mayorkas tweeted, “Today’s High-Level Security Dialogue marks an important new phase in the US-Mexico security partnership. We will work together under a new framework to guide our joint efforts, and work toward our shared goals of security and prosperity for our two nations.”

You would expect Harris, as vice president and person charged by the president to address the southern border crisis would be present at the important meeting with Mexican officials. She wasn’t.

It is not unusual for Harris to avoid the southern border once more. She was given the task of overseeing the crisis at the southern border earlier in the year. However, she has only visited it once since June, according to the New York Post. This was likely because Trump had already announced his trip, which made Harris reluctant to visit the border.

Harris and her team claim that Harris is working to address the root causes of the migrant crisis, not just the immigration crisis at home. Many also considered that Harris’s trip to Central America was a failure, with virtually no progress made. This is where the majority of migrants are from.

Harris’s avoidance of the southern U.S. immigration crisis has drawn bipartisan criticism, particularly from Texas politicians who represent communities that were devastated by illegal border crossings.