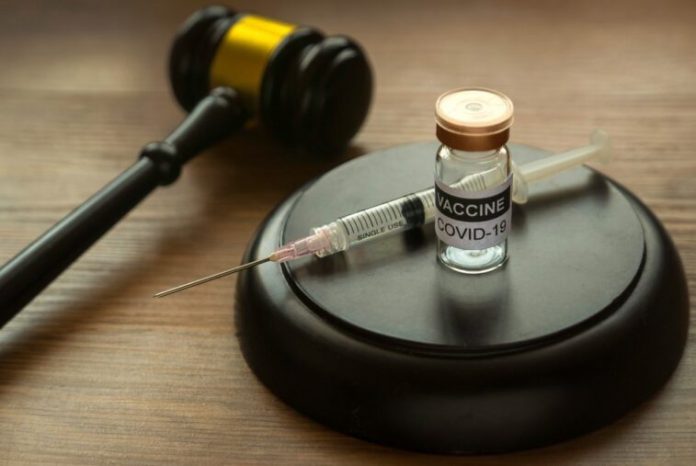 Federal Judge Denies Natural Immunity from Covid-19 Infection is Legally Justifiable Reason to Be Exempted From Vaccine Mandates. Even mainstream media outlets acknowledge that natural immunity is superior to vaccinated immunity, even though it was denied by a federal judge in a case brought against Michigan State University.

The court’s decision was reported Sunday by the Epoch Times:

An employee at the school, Jeanna Norris, filed a lawsuit against the mandate and asked a judge to intervene on the basis that she had already contracted COVID-19 and recovered. She presented two antibody tests showing her previous infection, and her doctors told her that she didn’t need to get the vaccine at this time.

Despite her natural immunity, Norris faces termination from the university for not complying with the school’s mandate that all students and staff get the shot unless they have a medical or religious exemption.

“This Court must apply the law from the Supreme Court: Jacobson essentially applied rational basis review and found that the vaccine mandate was rational in ‘protect[ing] the public health and public safety,’” Judge Maloney stated in his order. “The Court cannot ignore this binding precedent.”

The Boston Globe recently highlighted the “weakness” in the vaccine mandate argument.

“In 1905, the Supreme Court ruled that Massachusetts could fine people who would not take a smallpox vaccine,” the Boston Globe recently reported. “That case established a precedent for a 1922 case, Zucht v. King, that allowed San Antonio to mandate vaccines for all public and private school students. More recently, the Supreme Court cited the Jacobson case in its decisions about whether to permit governors in California and New York to place occupancy limits on religious services during a pandemic.”

“The Jacobson ruling gives the state nearly unchecked power to decide how to handle a public health emergency,” the report continued. “But that decision, old enough to have been written by a Civil War veteran, is jarring today because of the rights revolution in 20th-century American law. In cases decided after Jacobson, the Supreme Court has maintained that the Constitution — particularly the due process and equal protection clauses of the Fourteenth Amendment — limits the power of the state to touch the body. These Supreme Court cases concerning bodily integrity apply to every level of government, and they have also shaped public norms about individuals’ right to make crucial decisions about their own bodies.”

Sunday’s report by Reuters cited studies which further support the claim that natural immunity provides greater protection against Covid-19 than vaccinated immunity. It stated bluntly that the secondary immune response is stronger after infection than vaccination.

In COVID-19 survivors, important components of the body’s immune response called memory B cells continue to evolve and get stronger for at least several months, producing highly potent antibodies that can neutralize new variants of the virus, a new study has found.

By comparison, vaccine-induced memory B cells are less robust, evolving for only a few weeks and never ‘learning’ to protect against variants, researchers reported in a paper published on Thursday in Nature.

COVID-19 vaccines do induce more antibodies than the immune system does after a coronavirus infection. But the immune system response to infection appears to outshine its response to vaccines when it comes to memory B cells. Regardless of whether antibodies are induced by infection or vaccine, their levels drop within six months in many people. But memory B cells stand ready to produce new antibodies if the body encounters the virus.

“This study demonstrated that natural immunity confers longer lasting and stronger protection against infection, symptomatic disease and hospitalization caused by the Delta variant of SARS-CoV-2, compared to the BNT162b2 two-dose vaccine-induced immunity,” an Israeli study stated.

The figures of the CDC estimated that at most 120 million Americans were infected by Covid-19 by May 31st. This gives them superior natural immunity. This number can be projected to rise to at least 150 millions due to the Delta variant virus and the CDC’s estimate that there are at most four Covid infections per case.

According to the CDC admission, the Covid-19 vaccines don’t’stop spread’. This raises questions about whether a mandate for vaccination is justified on public health grounds. This judge’s decision ignores science and the fundamental human right of Americans to choose what they ingest.