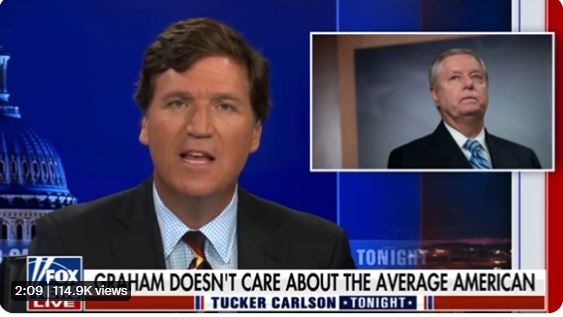 “My point to people here at home is you can expect gas prices to go up, you can expect food costs to go up. And I can tell you from history, anytime we sit silent and watch the rights of one group be eviscerated, it’s just a matter of time before it comes back to haunt us.”

Tucker Carlson wasn’t about to allow RINO Lindsey Graham get away with downplaying American sacrifices while tacitly pushing for conflict with Russia. Carlson snarled at him, saying: “It’s a little galling to be lectured by people with impossibly generous congressional pensions about sacrifices that you get to make. But it’s especially infuriating to hear the last guy who’s speaking of food prices, who’s skipped very few meals recently, tell you that looking at history informs you of everything you need to know about the future. Really?”

Tucker didn’t stop there in his pursuit of Lindsey Graham. Rather, he tore the RINO Senator and his pro-war sympathies to shreds, calling him out on a history of empty rhetoric and disastrous decisions that haven’t aided the average American in the least.

“When is the last time he did anything, one thing to improve the life of an American citizen other than himself?” pic.twitter.com/bNWGfU8XIz

Carlson chastised Graham for his flimsy historical references and lack of detail, pointing out that he did little to address the military’s stunning and humiliating failure in Afghanistan.

What kind of history are we discussing? Last year, when the United States withdrew from Afghanistan, the country was humiliated, degraded, and weakened. Is there anything Lindsey Graham, who claims to care about the military, has done to enhance it? Did he demand that anyone involved in the shameful disaster that resulted in the deaths of American citizens resign?

Tucker then shifted his attention to Lindsey Graham, slamming him for doing nothing, absolutely nothing, to help his fellow Americans. Instead, he’s made things worse for ordinary people while profiting, just like the other oligarchs.

Lindsey the RINO is one of those sad relics of a bygone era, when the RINOs reigned supreme, who serves as a testament and reminder of why we can’t trust the oligarchs to make decisions that are good for America rather than just for themselves. Graham wants a confrontation with Russia to make himself look tough, but it will be your kid who pays the price and dies in Donetsk.