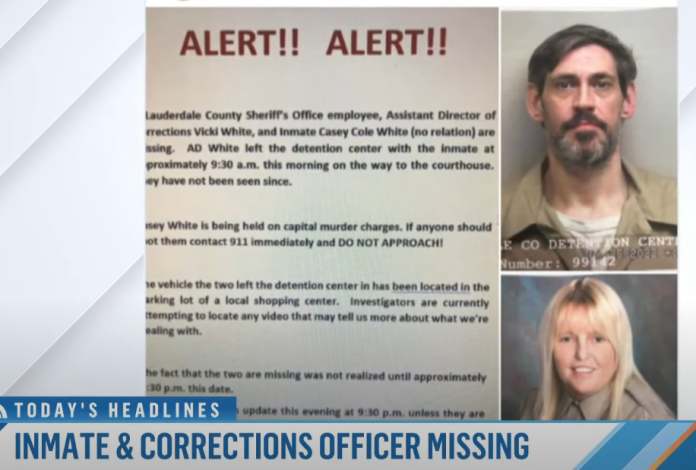 After transporting an inmate to a courthouse for a hearing, an Alabama prison officer went missing.

Assistant Director of Corrections Vicky White vanished while accompanying an inmate being detained on capital murder charges, according to the Lauderdale County Sheriff’s Office. The prisoner has likewise vanished.

Sheriff Rick Singleton stated Saturday morning that the Alabama Law Enforcement Agency, FBI, and US Department of Justice were all involved. The inquiry is being assisted by marshals.

White, 56, a 16-year veteran of the department, left the detention center on Friday morning with convict Casey White, and neither has been seen since. The two are unrelated. According to the sheriff’s office, the vehicle they were driving when they fled the detention center was located in a nearby shopping center parking lot.

White, 38, was charged with capital murder in the killing of Connie Ridgeway in 2015. In 2020, while serving time in state prison for unrelated offences, he confessed to the murder.

Vicky White, armed with a 9mm, departed the jail center with the convict about 9:41 a.m., according to Singleton. She stated she was going to the courtroom for a mental health examination for Casey. She was alone with the detainee, according to the sheriff, which was against department procedure.

The inmate’s mental health exam was not scheduled at the courts, according to Singleton.

White also informed coworkers she had a doctor’s appointment, which was verified, but the deputy never came up, according to the office.

Officials stated it wasn’t until 3:30 p.m. that they recognized the two were gone. Friday, local time Vicky White’s phone went to voicemail many times when deputies attempted to call her.

Singleton said his agency was thoroughly investigating the event and would go into the two’s past interactions to determine if anything else was going on.

Regardless of her role, the sheriff agreed that she may be in danger.