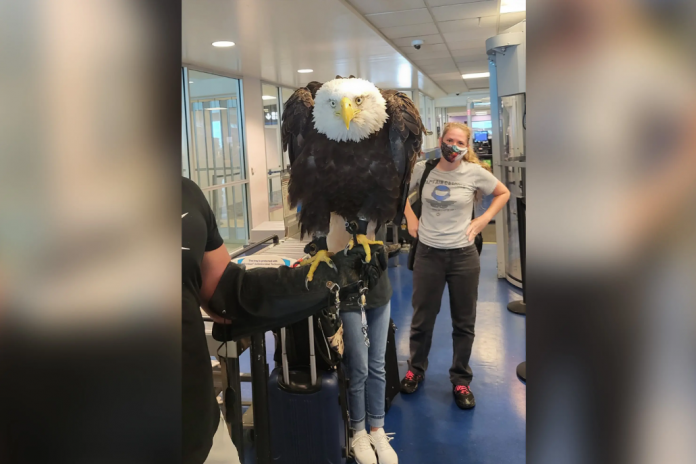 Unexpected airline traveler in North Carolina has the ability to take to the skies and soar.

At Charlotte Douglas International Airport, Clark, a bald eagle from the World Bird Sanctuary, attracted the attention of TSA security personnel as well as travelers.

According to TSA Southeast on Twitter, Clark elected to fly commercial while taking the day off from flying.

“TSA officers are used to seeing an eagle on their uniform as they look over their shoulder, but I’m sure the team at @CLTAirport Checkpoint A did a double take when they saw a real one earlier this week,” the message included a picture of the magnificent animal and the statement from the account.

The post claims that TSA personnel were informed that Clark would be flying and had the opportunity to be searched before boarding.

They even witnessed a little demonstration when Clark’s handler revealed that he can momentarily stretch his wings when instructed.

Another traveler recorded Clark the Eagle at the TSA checkpoint and tweeted it, stating, “America… Heck Yeah!” as Clark fluttered his wings in the shadow of a TSA agent.

The FAA website states that it is up to each airline to decide whether animals are allowed to fly in the cabin with people.