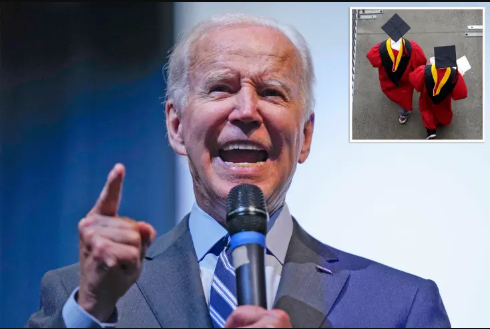 President Biden’s last-ditch effort to purchase votes and avert a devastating disaster in the midterm elections is the cancellation of student loan debt. However, the plan is probably going to fail when the votes are tallied.

Don’t spend the money just yet if you have student debts and are enjoying Biden’s news.

Biden’s plan will very certainly be rejected by the courts for flagrantly violating the Constitution.

Without Congress, Biden lacks the ability to declare a general debt remission for education.

The plan is expected to cost at least $330 billion, which is equal to double the US Army’s total yearly budget. The only person who has the authority to spend that amount of money is Congress.

Democrats like Biden are aware of this. In December 2020, Biden himself deemed the remission of student loans to be highly dubious. Just 13 months prior, Nancy Pelosi, the speaker of the House, maintained that the president lacked the power to pardon debt.

Biden’s unpopularity is hurting Democratic candidates as the November elections get closer, so the president is declaring forgiveness of student loan debt to purchase votes. According to Excelencia in Education, a higher education think tank, 43 million people, including half of all Latino student loan debtors, are anticipated to gain from the giveaway.

The ultimate workaround for passing laws while Congress is impassed, according to Biden’s chief of staff Ron Klain, has previously been blocked by the US Supreme Court three times. The court has ruled emphatically that the executive branch’s unelected agencies’ regulations cannot be used by any president to force significant changes on the country.

The Biden Centers for Disease Control and Prevention eviction moratorium was overturned by the Supreme Court in September of last year.

The Supreme Court intervened in January to stop Biden’s Occupational Safety and Health Administration from requiring COVID vaccinations for major companies. The Supreme Court held that OSHA lacked that authority.

Additionally, the Supreme Court decided in June that the Environmental Protection Agency under Biden could not close down fossil fuel-burning electricity facilities around the country. The EPA had never before been given permission by Congress to make such significant reforms. Such modifications can only be made by Congress.