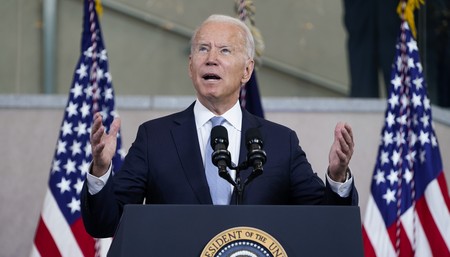 During the commissioning of a submarine, the USS Delaware, Joe Biden got himself into some controversy. During Biden’s speech at the ceremony, he appeared to be perplexed as to who had been Vice President.

They first focused the camera on Jill Biden while he spoke about her, most likely to demonstrate the loving wife look. They did, however, manage to record the look on her face at that very time, and it’s rather impressive. You can practically sense her aggravation and see her mouth droop in what appears to be a gasp.

The White House has developed a history of needing to clean up after Joe Biden, and they were on hand in this case to edit what he said on the White House transcript, striking out the “she” and replacing it with a “I” to indicate that, indeed, Joe was the Vice President.

Biden also appeared to slur his words at times throughout his remarks, but the transcript can’t help with that.

During the gun salute portion of the occasion, Joe Biden appeared to doze off while standing up and having to hold a salute. On the White House video, around 12:30, his eyes are closed and he appears to drop off.

Joe Biden fell asleep during the middle of the USS Delaware Commemoration. He was standing up at time.

It’s beyond time for Biden to step down. Everyone is aware of it, but they are too preoccupied with maintaining their power to confront it. However, the fact that they are prepared to jeopardize America’s security in this manner is disgraceful, and they should all be removed from office in November.