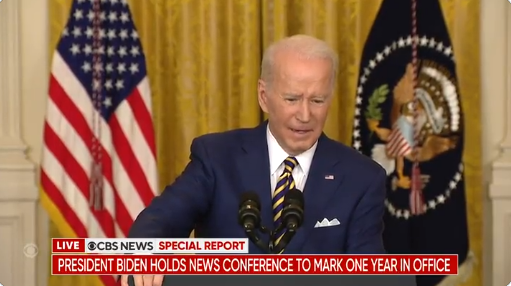 It was a total and absolute catastrophe for Slow Joe, as Edward Snowden, who isn’t exactly a right-winger, remarked out almost instantaneously on Twitter.

Starting to feel like this press conference was a mistake.

When Biden first became aware, he appeared completely out of touch. At a time when the Fed’s money printers and supply chain concerns are driving inflation soaring, he opted to pat himself on the shoulder, claiming that he’s really outperformed and that his administration has done a good job so far.

When a reporter mentioned that his administration’s plans aren’t working, he creepily grinned and added that he had two really large ones, most likely alluding to accomplishments. He didn’t say what he had accomplished, but he appeared pleased with them.

Biden’s brain sailed off into the cosmos after being asked about school closures, and the interview took a sharper tumble than his approval ratings. In reality, creating a transcript would be a Sisyphean process, so you’ll simply have to watch the excruciatingly terrible films of Biden trying to recall how to talk.

That is not a footage of someone with a functioning brain; rather, it is a video of a rotting eggplant of a leader who can’t even withstand softball questions from regime media journalists. And it’s not like he didn’t prepare; this was his first press conference in 300 days.