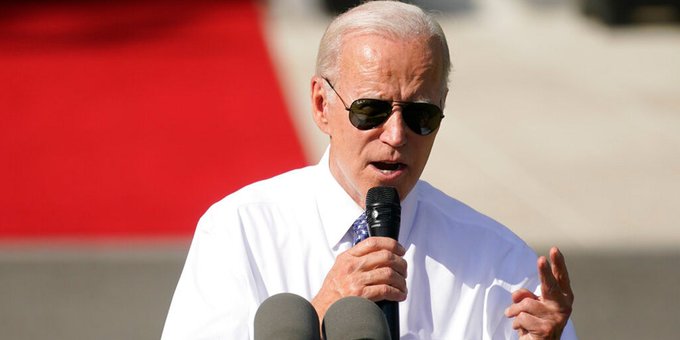 On the same day that it was revealed that August’s inflation was greater than anticipated, President Biden received criticism for hosting a White House celebration of the Democrats’ Inflation Reduction Act.

The stock market crashed in real time due to worries about rising prices, with the Dow Jones Industrial Average having its worst day since June 2020. Biden said the Inflation Reduction Act was the “single most important legislation passed in the Congress to combat inflation and one of the most significant laws in our nation’s history,” at the event on the White House lawn.

Twitter users responded to the odd scene right away.

Senior writer at National Review Charles C.W. Cook made fun of the events leading up to the president’s speech, which included James Taylor performing “Fire and Rain.”

“Not great timing to celebrate the ‘Inflation Reduction Act’ when inflation still a major problem and Dow down 1,000+,” tweeted Josh Kraushaar, senior political correspondent at Axios.

As the Titanic fills with water and prepares to plummet into the abyss, Biden’s White House celebration of a law that will significantly worsen inflation while claiming it cuts inflation is analogous to the musicians setting out the deck chairs to play.

A Dow Watch could be seen in the corner of a screenshot tweeted by Ryan Saavedra, senior writer at the Daily Wire, of Fox News’ coverage of the address.

Inflation increased 8.3% in August compared to a year ago, according to the Department of Labor’s most recent consumer price index report, which was released on Tuesday. This result, which was higher than anticipated, has increased market concerns that the Federal Reserve may hike interest rates more quickly than some had anticipated and for a longer period of time, which would impede the economy.