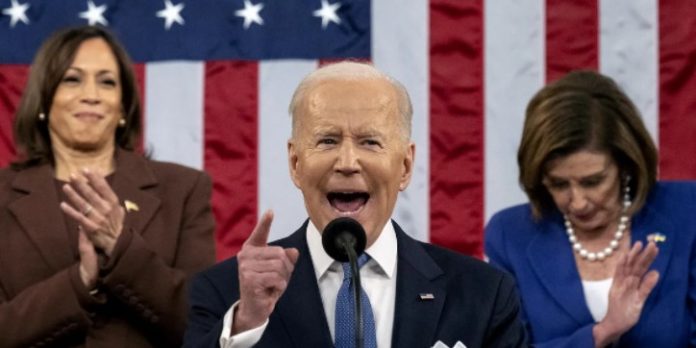 After President Joe Biden declared that Democrats would fund the police in his State of the Union address, the official account of the Black Lives Matter movement and many of its supporters attacked him.

Biden vehemently renounced the “Defund the Police” movement in his speech. Most Democrats applauded him for his remarks.

The policy announcement was not well received by all.

POV: listening to Biden declare “the answer is not to defund the police, it’s to fund the police”#SOTU pic.twitter.com/ZegIneiCvU

Other critics were more vehement in their condemnation of Biden.

“Fund the police? F*** you, Joe Biden. I f***ing hate this s***hole country,” tweeted one user who identified himself as a communist.

“Love how Biden listed a bunch of bipartisan things he signed for many groups and then for black ppl was like, ‘F*** YOUR MARCHES, More money for the police! Suck it blacks!’ Real cool stuff,” replied another commenter.

“Dude says we need to fund the police. He’s an enemy of the people. Simple as that,” replied Albert Corado, a candidate for the Los Angeles City Council.

“F*** off, Joe. The police are a corrupt, racist, transphobic, queerphobic institution. All cops are bastards,” said another detractor.

Establishment centrist Democrats blame progressives and the “Defund the Police” movement for their relative losses at the 2020 election. One memorable incident was when James Clyburn, the Democratic House Majority Whip from South Carolina, said on MSNBC that the defunding of the police movement was “nonstarter” even among black Americans and called it a “chokehold within the Democratic party.”

Here are the police comments from Biden: