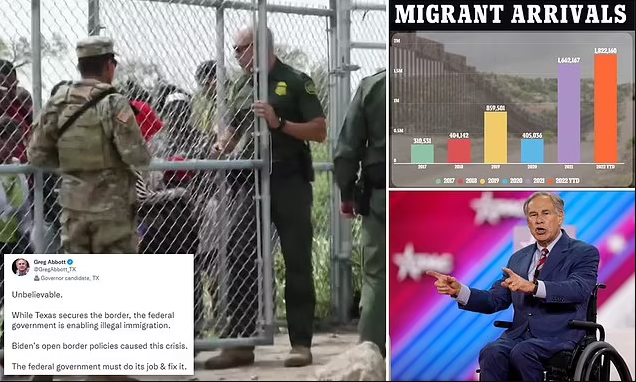 On Wednesday, Border Patrol officials unlocked a gate that had previously been shut by Texas National Guard personnel in order to permit a number of illegal immigrants to enter the country further.

The gate, which is on private property and was previously open, is closed and locked by members of the guard to bar passage to migrants who had crossed the border illegally and were hoping to enter the US.

A short while later, Border Patrol officers arrived with a key and unlocked the door, allowing the migrants to pass through and into the US immigration system.

Texas has increased law enforcement at the border as part of Operation Lone Star under Governor Greg Abbott. With Texas currently returning recently-arrived illegal immigrants to the border and its own border wall construction underway, this includes a focus on preventing migrants from entering the US.

While this is going on, Border Patrol agents have been forced to concentrate more and more on processing migrants into the interior, as migrants typically do not try to elude Border Patrol but rather seek them out in order to be processed and swiftly released into the US.

The majority of migrants are instead allowed into the US while some are returned under the still-in-effect Title 42 public health order for their immigration hearings, which can take years. Only 74,573 of the 199,976 interactions in July led to a Title 42 expulsion.

The Biden administration has come under fire from Republicans for reinstituting catch-and-release regulations, particularly for terminating the Trump administration’s “Remain in Mexico” policy, which detained migrants in Mexico rather than releasing them into the US.

Instead, the Biden administration has concentrated on addressing issues like poverty, violence, and climate change that are at the foundation of migration. Additionally, it has promised to reinstate the lawful asylum channels that the Trump administration purportedly eliminated.

Abbott has allowed some of the migrants who have successfully entered the US through Texas to travel to Washington, DC, and New York City. The mayors of those cities have expressed concern about the number of migrants being directed their way, begged for federal assistance, and criticized Abbott. So far, it’s been projected that 10,000 migrants have been deployed to each city.