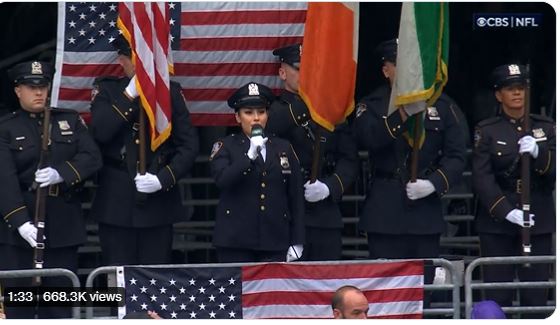 An NYPD officer by the name of Brianna Fernandez oversaw the singing of the national anthem during the most recent New York Jets-Baltimore Ravens game, which was played on September 11th, the 21st anniversary of the 9/11 assault.

In addition to singing the national anthem, Officer Fernandez urged the MetLife Stadium crowd to do the same. The crowd did as Fernandez requested, joining him in singing the national song and saluting the flag as they remembered 9/11 in a touching and stirring demonstration of solidarity and remembrance. Watch the video, which the Jets posted with the emojis of the American flag and the caption “Chills.”

However, not everyone found the display to be satisfactory. One individual noted that not many of the fans in the video were covering their hearts in his comment on the Jets’ website.

“Doesn’t anybody put their hand over their heart anymore? So much for patriotism. Show some respect, people!”

Another commenter posted, “Putting your hand over your heart is required for when you say The Pledge of Allegiance not the National Anthem. It’s a common misconception, but yes, everyone should be singing it to show respect.”

However, a lot of the spectators at the stadium appear to have made an effort to respect the flag, their nation, and even the recently departed Queen of England.

As Americans attempted to “never forget” the terrorist attacks that claimed over 3,000 lives in New York, Pennsylvania, and Washington, D.C., the song came to an end to thunderous ovation.

A moment of silence was also observed during the ceremony to honor Her Majesty Queen Elizabeth II of the United Kingdom, who passed away on Thursday. Starting in 1952 and remaining in power for more than 70 years, until her death in 2016 at the age of 96.

The NFL, however, has found itself on the wrong side of the national anthem dispute in the eyes of many conservatives, despite the fact that this was a good moment for the anthem, NFL, and New York City.