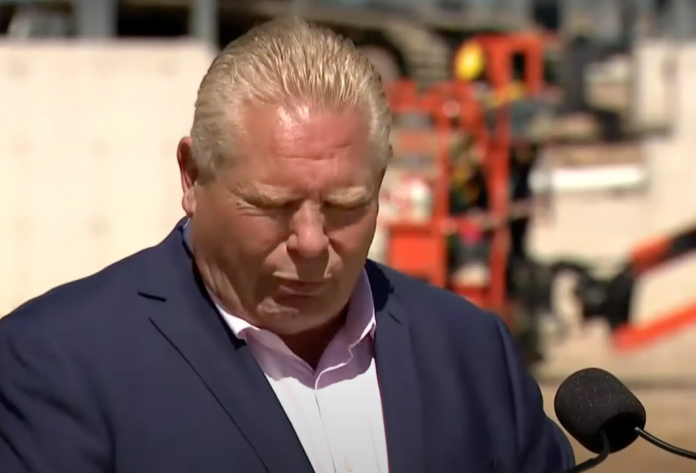 Premier of Ontario Doug Ford was speaking at a press conference about privatizing healthcare when a bee buzzed directly into his mouth.

Vic Fedeli, the Minister of Economic Development, Job Creation, and Trade, and Ford were on-site Friday for an announcement, and they spoke about the state of Ontario’s healthcare.

The bug can be seen hovering around Ford’s face until it makes a direct dive for his kisser in the video. This causes Ford to abruptly pull away from the microphone and reach into his mouth to try to remove the bug.

“Holy Christ, I just swallowed a bee!,” 57-year-old Ford is heard stating with a chuckle.

The video shows him sipping from a water bottle before joking that the incident’s footage would go buzzing around the internet.

Ford made an effort to brush off his private encounter with the bug before chuckling afterwards and said, “Man, he went right down the hatch.”

Ford assured reporters that he was alright and that the bee was constructing a hive there while smiling and calling the situation a classic.

When speaking about staff shortages at Ontario hospitals, which have resulted in several emergency departments closing their doors this summer, Jones had stated that all alternatives are on the table on Wednesday.

After being questioned about it during question time the next day, the newly appointed health minister appeared to retreat and responded, “OHIP cards are used in the province of Ontario to fund publicly funded health-care systems — that will continue under our watch.”