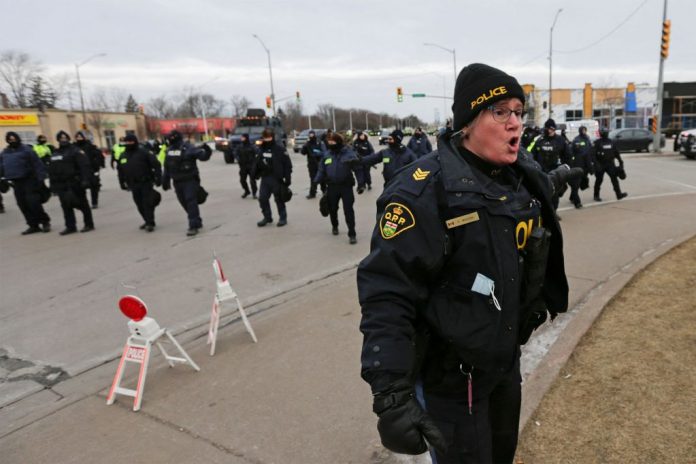 Protesters obstructing the Ambassador Bridge, which connects Canada and Detroit, have been arrested by Canadian police.

Enforcement actions continue at the demonstration area with arrests being made. Vehicles being towed. Please continue avoiding the area.

A 27-year-old man was arrested for a criminal offense in connection with the rally on Huron Church Rd near Millen St. Officers will act as needed to safeguard public safety and maintain peace and order.

The arrests come after the demonstrators were ordered to leave the area by a Canadian judge on Friday. Police in Windsor announced Sunday morning that they have a zero-tolerance policy for criminal behavior.

Before police came in, only two pickup trucks and a few dozen protesters were blocking the road to the bridge. Following that, police barricades remained in place, and it was unclear when the bridge would reopen.

Last week, the Ambassador Bridge, North America’s busiest border crossing, was stopped down as Canadian truckers protesting their country’s vaccine obligations made their way to the Detroit-Windsor border. Since then, the protests have intensified, causing traffic congestion in the Detroit area and across Canada.

Protests in Ottawa, Canada’s capital, have also continued, with over 4,000 people taking part. The Royal Canadian Mounted Police, the Ontario Provincial Police, and the Ottawa Police Service have formed a command center to deal with the current situation in the city.