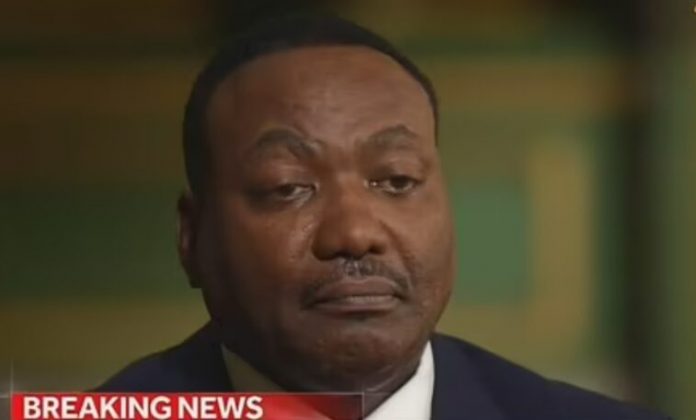 “I showed the utmost courage on January 6, and it’s time for me to do that now,” Byrd, a 28-year veteran of the force, stated anchor Lester Holt.

“I know that day I saved countless lives,” he stated, referring to some 60 to 80 members of Congress who were supposedly still in or around the chamber when a group of protesters broke glass on a door leading to an anteroom near the House chamber and tried to get inside.

“I know members of Congress, as well as my fellow officers and staff, were in jeopardy and in serious danger. And that’s my job,” Byrd continued to add.

He claimed that he didn’t know Babbitt wasn’t unarmed at the moment and added that he only learned this a few hours later.

“I was taking a tactical stance. You’re ultimately hoping that your commands will be complied with, and ultimately they were not,” he stated.

Babbitt’s family lawyer has stated that Byrd did not warn Ashli prior to firing. However, Byrd claims that he shouted repeatedly for her to stay back and only shot her “as a last resort.”

“You’re taught to aim for center mass the subject was sideways, and I could not see the full motion of her hands or anything so I guess her movement caused the discharge to fall where it did,” he said to Holt.

“‘I tried to wait as long as I could. I hoped and prayed no one tried to enter through those doors,” stated Byrd.

“But their failure to comply required me to take the appropriate action to save the lives of members of Congress and myself and my fellow officers,” he stated.

“It’s disheartening, if he was in the room or anywhere and I was responsible for him, I was prepared to do the same for him,” he said.

Babbitt was the only one who was killed on that fateful day.

Holt inquired of Byrd why no other officers had opened fire on Babbitt and anyone else trying to enter the doorway.

“I’m sure it was a terrifying situation. And I can only control my reaction, my training, my expertise. That would be upon them to speak for themselves,” he stated.

Holt also inquired about Byrd’s report that he had left his service weapon in a Capitol restroom.

“‘It was a terrible mistake, I acknowledged it, I owned up to it, I accepted the responsibility, I was penalized for it, and I moved on,” he stated.

Capitol Police’s investigation concluded that Byrd wasn’t at fault in the shooting, and cleared him from any further discipline.

His identity was kept secret until Holt’s interview when Holt interviewed him. Capitol Police refused to reveal his name because of concerns for his safety.

However, speculations that it was him were not stopped.

“Who was the person who shot an innocent, wonderful, incredible woman?” Trump asked in June.

Some media outlets reportedly knew Byrd’s identity for months but refused to report it.