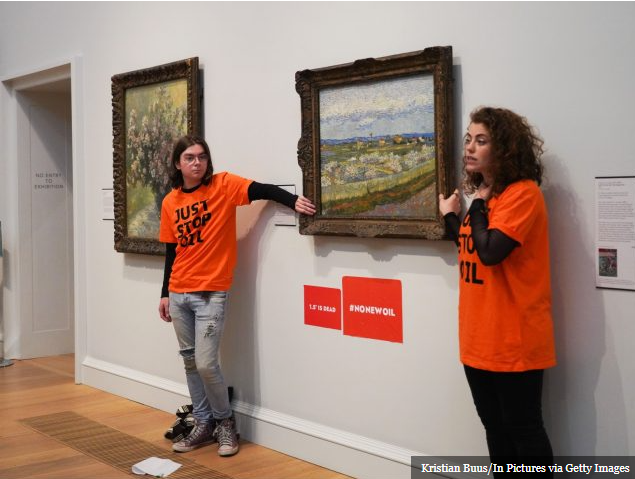 To pressure the government into stopping fossil fuel projects, climate fanatics from the Just Stop Oil organization have attached themselves to pieces of art like William Turner and Vincent van Gogh.

According to a protester who appeared to be male and was seen with a friend plastered to van Gogh’s Peach Trees in Blossom at London’s Courtauld Gallery in a video posted on social media by TalkTV, “Sorry everybody, we don’t wanna be doing this, we’re here glued to this painting, this beautiful painting, because we’re terrified for our future.”

“We’re here for a group called Just Stop Oil, we expect to be arrested today,” he continued, not looking especially alarmed by the possibility — maybe appropriately, considering the authorities’ penchant for releasing climate extremist demonstrators without pressing significant charges despite their disruption of vital national infrastructure more important to the nation than a painting.

In fact, the protester, is identified as a student Louis McKechnie, is a seasoned member of the gang who has previously blocked traffic on one of Britain’s busiest motorways by gluing himself to the M25 and stopped play at a Premier League football game by affixing himself to a goalpost.

Despite being distant from London, Just Stop Oil protestors remained hooked to William Turner’s Aeolian Harp by Thomson in the Manchester Art Gallery, indicating some kind of national coordination on the part of the environmental extreme group.

The Manchester protesters also scrawled the words “NO NEW OIL” in crude spray paint on the gallery floor next to the picture.