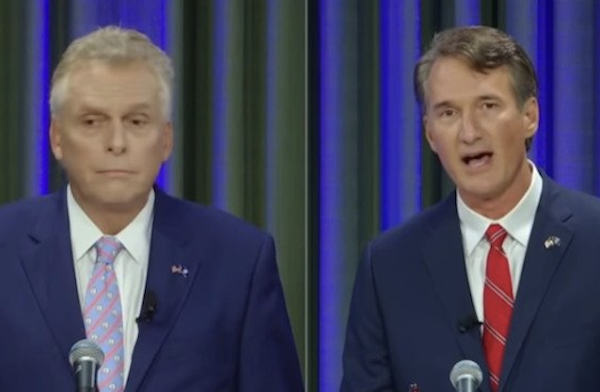 As the Virginia governor race draws near, Democrats are starting to panic.

Democrats are not in a good position considering that Republican Glenn Youngkin is proving solid while Democrat Terry McAuliffe has been a huge flop.

Take a look at what Politico reports.

‘Everyone should be very worried’: Dems seek wake-up call as Virginia goes to the wire

A creeping sense of worry among Democrats about the Virginia governor’s race spilled into the open on Wednesday, after the release of a new Monmouth University poll showing former Democratic Gov. Terry McAuliffe deadlocked with Republican Glenn Youngkin less than two weeks before Election Day…

The Monmouth poll was the latest in a series of data points to increase concern about McAuliffe’s prospects. While other recent polls in Virginia have shown McAuliffe staked to narrow leads, President Joe Biden’s national ratings have slid into majority disapproval of his tenure, with his agenda still stalled in Congress.

Democrats’ internal polling elsewhere is similarly bleak, as they look to keep their slim majorities in Washington. And turnout among early and mail voters, which Democrats often look to as a barometer of enthusiasm, paints an uncertain picture two weeks out.

“There’s going to be panic. There’s going to be consternation. But what I would tell donors and operatives is, ‘You should be worried, so pay attention and put resources into this,’” said Tim Lim, a longtime Democratic strategist. “The same thing happened in California. Once Democrats started paying attention and keyed into it, the numbers shifted. The same can happen in Virginia.”

Check out the following video down below:

Watch: As governor, @GlennYoungkin will…

🏫Restore the standards of excellence in our schools.

"On the ballot right now in November is the future of Virginia and of America." #VaGov pic.twitter.com/HTw6x9ahtF