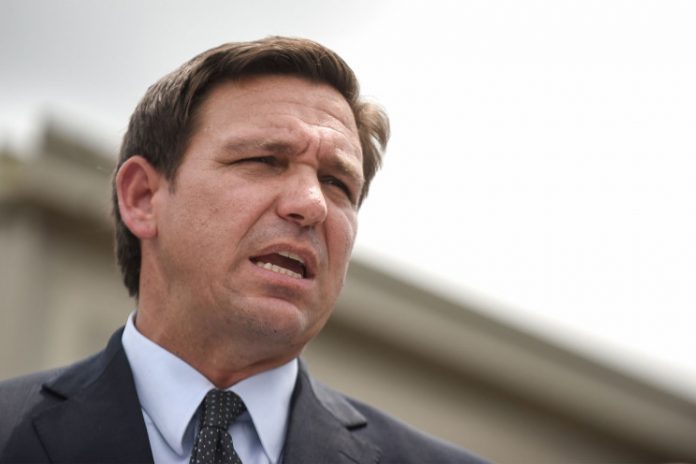 Florida Republican Governor. Ron DeSantis blasted President Joe Biden Wednesday after he announced states that have banned the implementation of mask mandates in schools could face lawsuits from the Department of Education.

“You have all the stuff going on with Afghanistan – obviously all the stuff at the southern border … one of the biggest border disasters in the history of our country, inflation, gas prices, and what does he do?” DeSantis grumbled on Fox News Show “Hannity.”

“He is obsessed with having the government force kindergartners to wear masks all day in school,” said the governor. “In Florida, we believe that that’s the parents’ decision. Joe Biden thinks the federal government should come in and overrule the parents and force these young kids to wear these masks.”

Biden spoke from the East Room at the White House on Wednesday and stated that he had instructed Miguel Cardona, Education Secretary, to use all of his oversight powers and legal actions against governors who try to intimidate educators and school officials.

Cardona replied by suggesting that the department’s civil rights arm could be used to combat mask mandates in Arizona and Texas, Florida, Iowa. South Carolina, South Carolina. South Carolina. Tennessee. Texas. In a statement, the secretary stated that he had written letters to eight states stating that such prohibitions could violate the American Rescue Plan. This prevented schools from developing safe reopening strategies.

“These states are needlessly placing students, families, and educators at risk,” Cardona wrote. “Yet in each of these states, there are also educators and others who are taking steps to protect the health and safety of their school communities.”

DeSantis reacted to Biden’s comments Wednesday night with a broadside. He didn’t respond to shouted questions by the media corps about Afghanistan for the second time in three days.

“I mean, you gotta wonder, where are your priorities that you’re so obsessed with this issue and so obsessed with taking away parents’ rights?” the governor said. “And you’re letting Afghanistan burn, our border burn, and so many other things in our country fall to pieces.”

Before the Taliban’s advance across Afghanistan stole the headlines, DeSantis and Biden engaged in a war of words over mask mandates in schools, with the governor accusing the president of wanting to implement a “biomedical security state” and the president responding by calling DeSantis “Governor Who?”

DeSantis is a leading contender for the Republican nomination 2024. He then accused Biden of being “asleep as the switch” in Afghanistan. DeSantis said that he supports the withdrawal of US troops from Afghanistan.

“All of our adversaries are taking the measure of Joe Biden, and they see that this is not somebody who’s capable of leading with conviction and leading on the world stage,” he continued. “So they are going to do everything they can, as long as he’s president, to take advantage of that, and I think we’re in for a rocky three-and-a-half years as long as he’s president.”