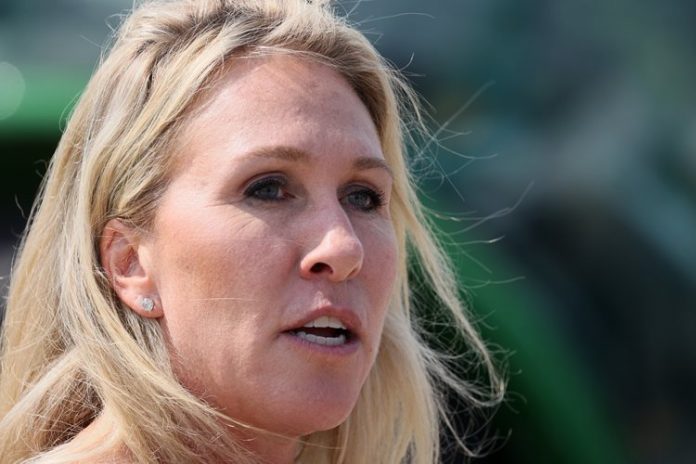 Rep. Marjorie Taylor Greene has announced that she will present articles of impeachment against President Joe Biden Friday.

The announcement by the Georgia Republican was made Thursday at an event in Iowa with Rep. Matt Gaetz (R-Fla.). A video of her comments was tweeted by RSBN.

“Yes I do have articles of impeachment drawn up to submit tomorrow,” a smiling Greene told a cheering crowd. “Because I believe in firing people when they’re corrupt, and they do a bad job. And Joe Biden is failing America and he needs to be impeached.”

Greene previously stated that she had filed articles against Biden just one day after his swearing-in.

At the time, Greene had said she was citing in the impeachment papers Biden abusing his power while vice president by allowing his son, Hunter, to serve on the board of a Ukrainian energy company.

“President Joe Biden is unfit to hold the office of the presidency,” Green had said. “His pattern of abuse of power as President (Barack) Obama’s vice president is lengthy and disturbing. President Biden has demonstrated that he will do whatever it takes to bail out his son, Hunter, and line his family’s pockets with cash from corrupt foreign energy companies.”

We noted her latest comments come as Biden faces criticism over how the U.S. withdrawal from Afghanistan is being handled.

A news site reported that Greene harshly criticised Biden for not being able to help americans leave Afghanistan.

Members of the House voted 230 to 199 in February, with 11 Republicans backing the Democrats. Greene was removed from the Education and Labor and Budget Committees for comments she made on social media in 2018 supporting QAnon theories.

Greene called it “hypocritical” to kick her off the committees over her comments on social media.