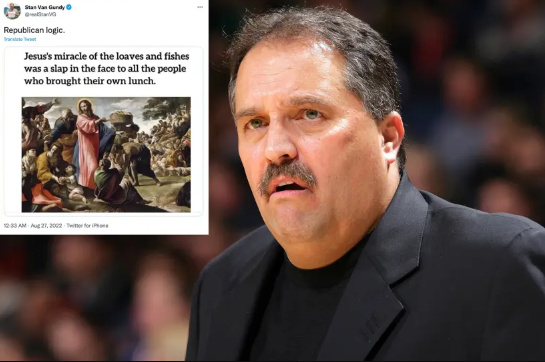 Stan Van Gundy, a former NBA coach, attempted to exploit the Bible’s account of the loaves and fishes to parody critics of President Biden’s student loan forgiveness plan, but was quickly destroyed by Twitter.

Van Gundy, the older brother of former Knicks coach Jeff Van Gundy and a former coach of the Orlando Magic, shared a meme with a picture of Jesus in the narrative with the caption, “Jesus’s miracle of the loaves and fishes was a slap in the face to all the people who brought their own lunch.”

According to the posting, the relief plan’s detractors who contend that it is unjust to people who have already repaid their student debts, attended less costly colleges, or chose a different professional route were being made fun of.

“The college educated aren’t the poor and helpless! Waiters and laborers are paying the bills of doctors and lawyers,” one user posted.

“Jesus made the fish and bread from nothing. It was not redistributed and forcibly taken from working class people​,” the tweet said.

Someone enquired, “Stan, where did the loaves and fishes originate from? ”