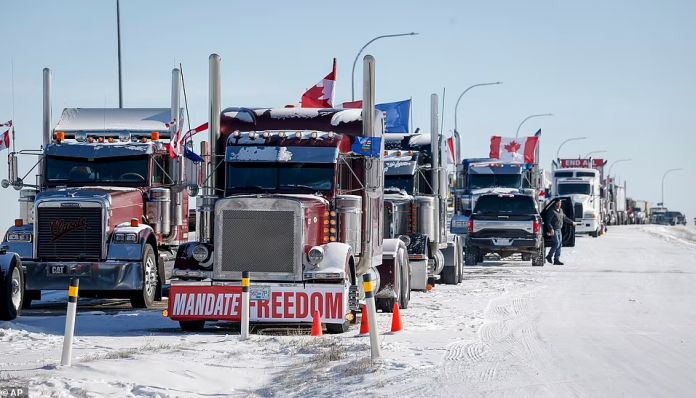 After GoFundMe began refunding the $8 million in donations collected for a Freedom Convoy protesting Canada’s COVID-19 vaccine mandates, Facebook took down a page established by American truckers to organize a convoy to Washington DC.

The Convoy to DC 2022 group was banned by Meta, the social media platform’s parent business, for frequently breaking our regulations concerning QAnon.

Trucker Jeremy Johnson, who founded the group, claims that his personal Facebook account was also deactivated, prompting him to seek legal advice about his options.

Conversely, the GoFundMe account supporting the Canadian Freedom Convoy, which has raised $10 million Canadian dollars ($8 million USD), was banned for the second time on Wednesday night after the firm stated it wanted to ensure the account complied with its terms of service.

Since last Friday, more than 200 trucks and other vehicles have blocked downtown roadways in Canada’s capital, raising questions about the company’s objectives.

According to political commentators, the trucking demonstrations that have splintered the official opposition Conservative Party are intended to aid Prime Minister Justin Trudeau’s liberals, leading some to wonder if GoFundMe is siding with the Canadian leader.

The crowdfunding site, on the other hand, claims that the suspension is necessary to ensure that donations reach their intended recipients, despite the fact that some contributors apparently received emails on Thursday stating that they were being refunded with no explanation as to why.

Tim Cadogan, the CEO of GoFundMe, who lobbied the US Congress last year to pass emergency COVID-19 help, has been silent on the Freedom Convoy fundraiser.