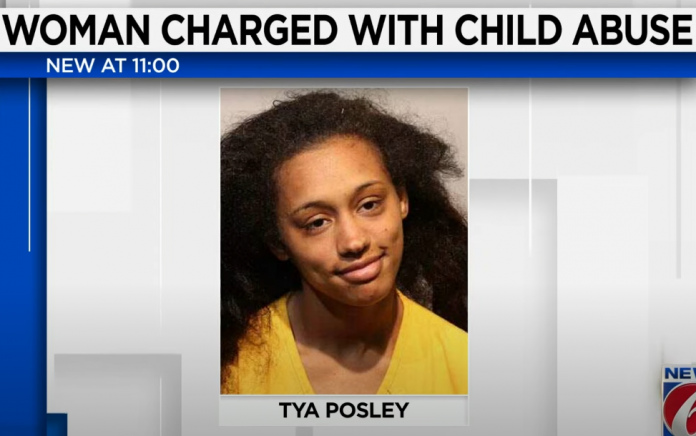 After a horrifying viral video showed her assaulting her one-year-old daughter, a Florida lady was arrested. Tya Posley, 23, was detained at her house by Sanford police on Tuesday morning after learning of the footage she had uploaded on her Instagram story.

“Your daddy wants to post s**t right, he wants to fu**** post s**t and not answer the god damn phone,” Tya can be heard addressing the baby in the sorrowful footage. Before smacking the youngster in the face and on the back, he says, “I hate your a**.”

When the police first came to Tya’s house, it was to do a wellness check on the youngster. Despite the lack of visible marks on the infant, authorities were able to identify the one-year-old as the victim shown on film, according to reports.

Under the jail please.
God please protect that baby! This is disgusting. So sad how a hoe will do they kid about a nigga. https://t.co/X5deqwQq5J

They were also able to identify Tya as the lady who struck the youngster. In response to the video, social media users demanded that the mother be held accountable.

“This Tya Lynn girl needs to be arrested immediately and she needs to lose all custody of her baby,” one user tweeted. To damage a kid, you have to be a different type of evil.” Ari Fletcher also expressed her contempt for the young mother, writing, “Under the prison, please.” Please, God, keep that baby safe! This is revolting. It’s very awful how a h*e will treat a ni**a.”

Tya is now being jailed at the Seminole County Sheriff’s Department on charges of cruelty to children without causing substantial bodily injury.

She has been released on a $2,000.00 bail and is due in court on June 7th. Currently, the infant girl who was abused is in the custody of Child Protective Services (CPS).