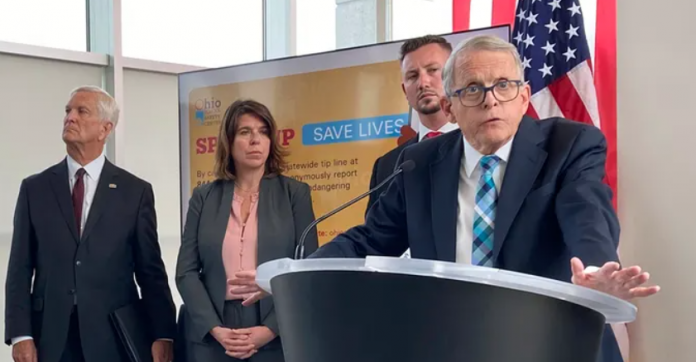 Gov. Mike DeWine of Ohio signed a measure into law on Monday that allows school districts across the state to approve teachers, administrators, and other personnel to bring weapons into classrooms after only 24 hours of training.

According to The Columbus Dispatch, the new law, which was first introduced by state Republican Rep. Thomas Hall as House Bill 99, will reduce the required training hours for armed personnel from about 700 hours to just four hours of scenario-based or simulated training exercises and a maximum of 20 hours for first aid training, history of school shootings, and reunification education.

School employees in Ohio have been allowed to carry guns onto school campuses for years with the approval of their local school board, though a 2021 Ohio Supreme Court ruling required them to complete the same basic peace officer training as law enforcement or security personnel allowed to carry firearms at schools.

This came to more than 700 hours of training, so the signing on Monday will dramatically reduce the number of hours of teaching necessary.

After an employee has been certified to carry a weapon, the legislation mandates up to eight hours of yearly training. The Ohio School Safety Agency must approve the training programs, and DeWine has ordered the center to demand a minimum of 24 hours and a maximum of eight hours.

DeWine stated that schools can give additional training if they so want.

Other school safety measures supported by the Republican governor and legislature include $100 million for school security enhancements and $5 million for college security upgrades.

The state is also staffing the school safety center with 28 additional staffers who will consult with districts on safety problems and give training under the new law. The governor also announced that Ohio has allocated $1.2 billion in wellness funding to schools to address mental health and other challenges.

Democrats say the bill sends the wrong message since it was passed so soon after the slaughter of 19 students and two teachers at a Uvalde primary school. According to Republicans, the bill might avoid similar shootings. Lawmakers moved quickly to pass the bill in response to a court judgment that suggested armed school employees would need hundreds of hours of training under existing law.