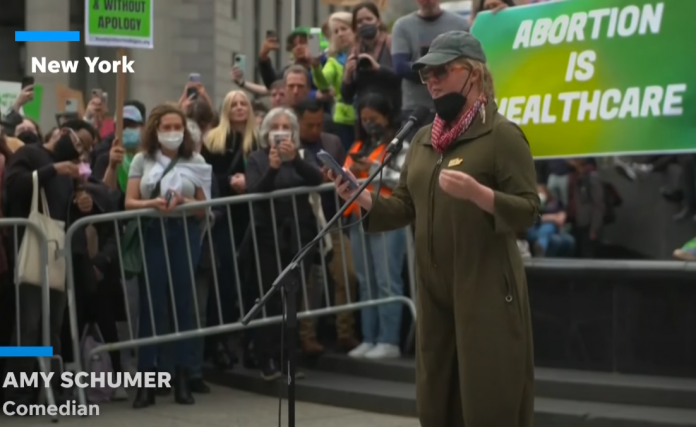 Hollywood is attempting to mobilize the public in rallies against the impending Roe vs. Wade ruling by leveraging its social credit strength. In the case of Dobbs vs. Jackson Women’s Health Organization, the Supreme Court was anticipated to rule soon. Politico has received a leak of a likely judgment for the first time in the court’s long history. The timing is particularly suspect, given the Democrats’ poor showing in the midterm elections.

On her Instagram page, Amy Schumer was being a very good little soldier for the elites attempting to rouse the soldiers. She urged Americans to come to the streets in support of abortion rights. On May 3rd, she was joined by New York Attorney General Letitia James at a protest in Manhattan.

On her Instagram, Lena Dunham, who hasn’t been seen on TV since 2017, was also screaming at the top of her lungs about Roe vs. Wade. Lena Dunham, who had previously expressed her desire for an abortion and reportedly confessed to sexually abusing her sistere, had to weigh in.

Dunham and Schumer were far from the only celebrities who demanded that their adoring followers take to the streets in protest. You can’t tell a woman what to do with her body as long as she has a heartbeat, according to Olivia Munn from Predator. Ironic, given her support for mandating vaccinations for admission to the Kennedy Center in March 2021.

On the other hand, Hunger Games star Elizabeth Banks points out on Twitter how the Roe vs. Wade issue is benefiting Democrats in the polls.

In another tweet, she continues to blame males for abortions, claiming that women have no role in sex. She claims that unintended pregnancies are caused by careless ejaculation, and that most males are frightened of getting women pregnant.

Despite what this platform and a vocal minority would have you believe, abortion is not that controversial in everyday America. Most Americans support reproductive rights. Get out the VOTE for it. https://t.co/saE7O8hWlo

Irresponsible ejaculation. That’s the cause of all unwanted pregnancy. Most guys I knew were afraid to get a woman pregnant. #RoeVWade protects everyone – women AND men – from parenthood before they are ready, willing and with the right co-parent.