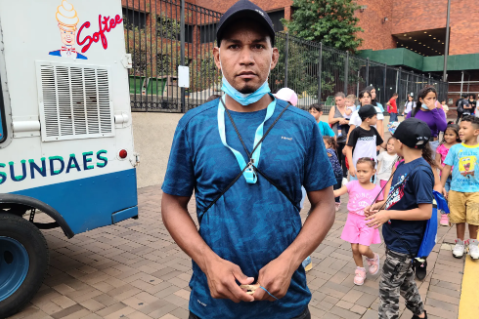 Hundreds of migrants waited in line outside Lincoln Hospital in the Bronx on Sunday to receive free phones, food, and other necessities like health insurance and food, at least some of whom Texas Governor Greg Abbott had bused to New York City.

The city medical system planned the event, which was advertised as a resource and family fun day for the migrants and their kids as many of them had recently flocked to New York City.

Medina claimed to have traveled alone from his home country, spending six days walking through the jungle, and arrived aboard a bus that left Texas five days prior.

Medina claimed to have seen an advertisement for the event while residing at the Bellevue Men’s Shelter. When he conducted the interview, he was standing in line for ice cream.

Luis Quintana, 48, a fellow Venezuelan who arrived in the city from Texas on Friday, claimed he attended the gathering to obtain a government-issued ID and health insurance.

A Venezuelan couple and their two children were standing in line patiently in the hope of receiving legal aid to allow them to remain in the US.

Gonzalez claimed that she and her family, including her husband Argenis Ramirez, 40, and their kids, had been residing in a shelter in Brooklyn ever since they deplaned from Texas in early July.

The Republican governor of Texas, who has screamed over what he deems President Biden’s lax, out-of-control border policies and has also targeted Democratic metropolitan mayors, had bussed at least part of the migrants to New York City.

The migrants entered Texas illegally from Mexico and claimed to be seeking asylum, which gave them permission to remain in the country while their cases were being heard in court.

At least interim health care coverage is being provided for the migrants at the event on Sunday, according to MetroPlusHealth.

There was a block-long line to enter the event on the hospital’s Great Lawn.

Additionally, library cards and back-to-school materials for their children were given to migrants.