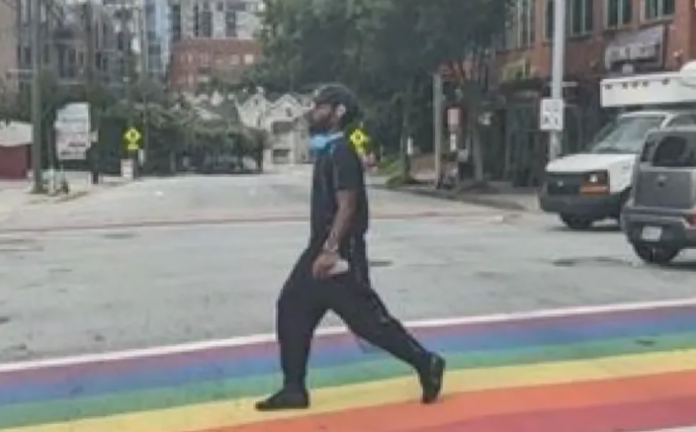 A Georgia man who spray-painted swastikas on an LGBTQ rainbow crosswalk in Atlanta was taken into custody by a SWAT team.

At the intersection of 10th Street and Piedmont Avenue, a symbol that appeared to be a swastika had been spray-painted when the Atlanta Police LGBTQ Liaison Unit first received word of it on Wednesday.

The crosswalk’s hatred symbol was immediately removed by the Atlanta Department of Transportation. However, the same LGBTQ rainbow crosswalk had another swastika spray-painted on it.

In midtown Atlanta, a crosswalk marked with LGBTQ rainbows was painted with swastikas by an unidentified individual who was seen on surveillance footage and a dash camera.

“This is an unacceptable act in this city, anywhere in this city or in any form where citizens are targeted by hate. This department is aggressively looking now for the individual who did this.” said Atlanta Police Chief Darin Schierbaum in a prior statement.

The Atlanta Police Department requested assistance from the public in locating the suspect.

Around noon on Friday, the suspect was located by investigators, who then went to his apartment. Police were confronted by the suspect, who remained silent.

According to TaSheena Brown, a spokeswoman for the Atlanta Police Department, the suspect was apprehended and put into jail without a hitch at 5 o’clock.

The suspect’s identity was kept a secret by the authorities. The accusations against him are not yet known.

A spokesman for Atlanta Mayor Andre Dickens complimented the city’s staff for swiftly and effectively eradicating the bigotry that has no place in our community.

For the 2015 Pride event, a rainbow crosswalk was painted for LGBTQ people.

The LGBTQ rainbow crosswalk in Atlanta became permanent as a tribute to the 49 people killed in the horrific 2016 Pulse nightclub tragedy.

According to the group that demanded the development of the painted street, the rainbow crosswalk symbolizes acceptance, solidarity, and tolerance and depicts the diversity of the LGBTQ+ community and its allies.