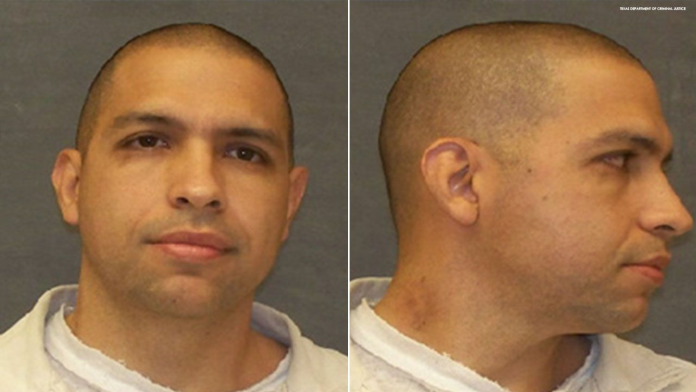 Texas is currently hunting a prisoner serving a life sentence in capital murder. He escaped after attacking an officer and causing the bus to crash.

According to law enforcement Gonzalo Lopez (46), assaulted a correctional officers while riding on a bus to Centerville, Texas for a medical appointment. Lopez is currently serving a life sentence in prison for attempted capital murder and capital murder. Lopez has been convicted multiple times of aggravated assault.

Texas Department of Criminal Justice spokesman Robert Hurst said Lopez “was somehow able to get out of his shackles and get into the driver’s compartment of the bus.”

Hurst stated that Lopez was able “to overpower the driver.” The struggle ended and the bus veered off the road.

The officer who had been driving the bus was stabbed in the hand, according to Hurst, before Lopez jumped from the bus and fled.

“We do not know if he has obtained any kind of a weapon,” Hurst said. “Last we saw him he did not appear to have a weapon in his possession, but who knows what he might’ve been able to get.”

The Texas Department of Criminal Justice, and the Texas Office of the Inspector General announced Thursday that they are “searching” for the inmate close to Highway 7 westbound in Leon County, approximately 1.5 miles from Interstate 45. Lopez is currently serving a life sentence in Hidalgo County for capital murder and Webb County for attempted capital murder. You should immediately call 911 to report Lopez’s presence and not approach him.

In an update early Friday morning, the Leon County Sheriff’s Office said: “Suspect still at large. Numerous agencies still working together to apprehend [the] subject, including DPS Aircrafts. We are working in the area north of Hwy 7, closely in the area between CR 317 & CR 320.”