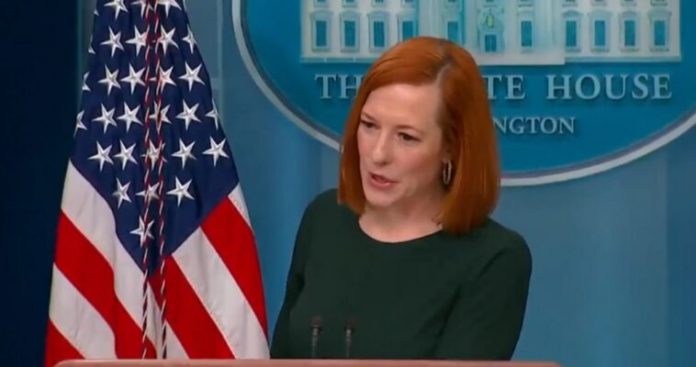 The White House is vehemently denying that their anti-American oil and gas policies are driving up energy prices in the US.

Jen Psaki, the White House press secretary, got into a spat with Fox News’ Peter Doocy on Thursday about projects like the Keystone XL pipeline, which the Biden administration canceled immediately after taking office.

“Is a restart of the Keystone XL construction completely off the table as long as Joe Biden is president?,”  Doocy inquired.

“Well, why don’t you tell me what that would help address?,”  growled Psaki.

“You say you’re open to all possibilities. Is one of them resuming Keystone construction? ”

With a straight face, Psaki asserted, “If we’re trying to bring about more supply, that does not address any problem.”

Doocy accurately pointed out, “It’s supply from Canada, a friendly ally, instead of Saudi Arabia.”

Rep. Sean Patrick Maloney (D-NY), head of the Democratic Congressional Campaign Committee, said that the United States should not be trading one tyrant for another in order to meet the country’s energy demands.

Officials from the Biden administration recently traveled to Venezuela to discuss the possibility of relaxing sanctions, including resuming energy imports to compensate for the prohibited Russian oil.

Nevertheless, Biden has looked to autocratic Middle Eastern countries for help with global oil supplies, but has received criticism so far.

Both the Saudi crown prince and the sheikh of the United Arab Emirates have rejected President Biden’s offers to help the US cut global oil and gas prices.