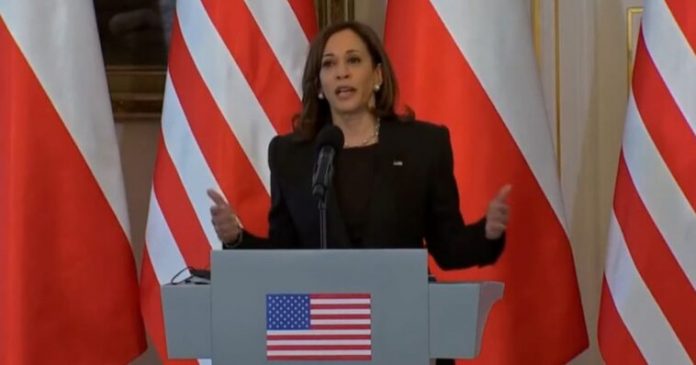 Kamala Harris, the United States’ Vice President and, in some ways, the next in line for President if Joe Biden drops out, was recently dispatched to Poland to discuss NATO.

Next to her stood the perplexed Polish President Andrzej Duda, who nodded and smiled as if he understood what she was saying.

The fact that the US had to formally reject Poland’s attempts to lure America into World War III by supplying Ukraine with jets that would be back-filled by the Pentagon added to the embarrassment.

However, the United States agreed to send Poland two additional Patriot missile systems as well as $53 million in aid to help pay for new Ukrainian refugees.

Only Kamala Harris would find it appropriate to laugh when talking about the topic of Ukrainian Refugees.

When it came to Ukrainian migrants, Harris was roundly chastised for her inappropriate laughter when asked if the United States would accept them.

Former Trump campaign staffer George Papadopoulos said Kamala Harris was very consistent during her live statements with Poland’s president. She’s laughing awkwardly. It’s not funny to talk about refugees. It’s beyond me why she laughs at this.

But here’s the real guffaw- officials in the Biden administration doing their jobs and avoiding a catastrophe like Russia’s invasion of Ukraine from occurring in the first place.