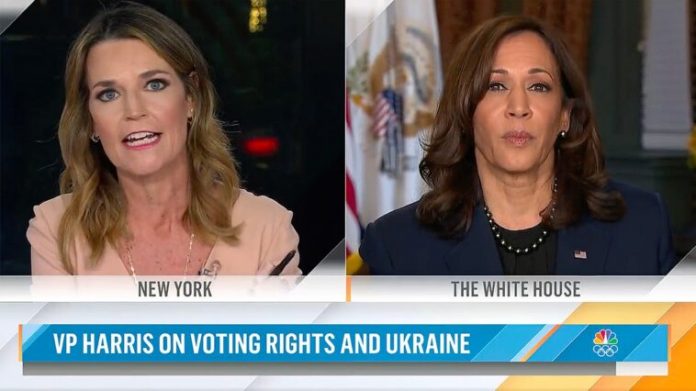 Despite being in friendly territory, Kamala was even less capable of handling questions than Biden was at the press conference. He failed miserably. In fact, it was his response regarding Ukraine that got Kamala into the mess she was in.

Biden began by promising that Russia will be held accountable if it launches an attack against Ukraine, but then hedged by saying that it is all dependent on what Putin will do.

However, Kamala mentioned in the interview that “The president has been very clear and we as the United States are very clear, if Putin takes aggressive action, we are prepared to levy serious costs, period. And I will tell you that part of the posture that we have taken is grounded in the respect and the value we place in.”

Guthrie then asked her further questions about her comments about Ukraine, to which she answered by sending sparks flying once more, this time by saying “I will repeat myself, and I’m vice president of the United States, and the president and I work closely together, and I know his position because he’s been consistent in that regard. If Vladimir Putin and Russia take aggressive action, it will be met with a cost that will be severe.”