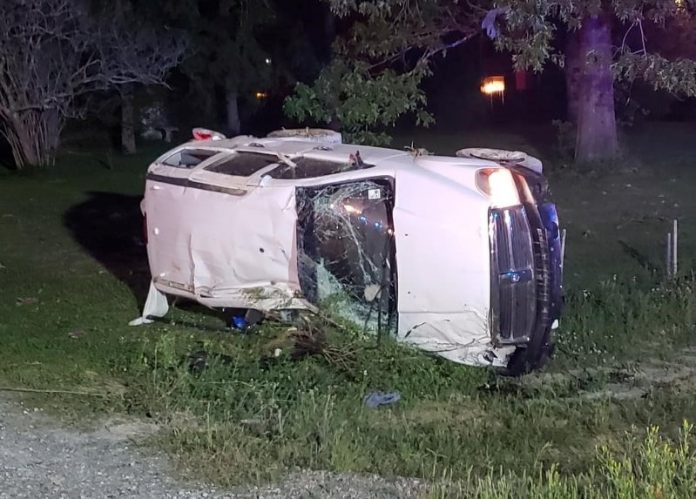 After a terrifying collision in which her SUV repeatedly flipped over with her 11 children inside, a mother is facing child abuse charges.

One of the children was ejected from the truck and had to be airlifted to the hospital. Following the incident in Louisiana, authorities issued a summons to Leticia Brothers’ mother.

She was injured, along with her four children, ages 4 to 16, in a car collision on Sullivan Road near Huntley Avenue in Baton Rouge just before 10 p.m. on the following Sunday Everyone is anticipated to make it out alive.

No seat belts were worn by any of the youngsters, according to police, and Brothers, 34, was driving without insurance and with a suspended license. She was charged with 11 counts of cruelty to minors and reckless operation, among other things.

Authorities said “We’re lucky there wasn’t a fatality of a child…Two of the children were sitting in front, one was in the passenger seat behind the driver, four were in the next seat and four were in the hatchback, which didn’t have a window, just plastic.”

“There was no rear glass in the car; it simply had a plastic bag over the back window,” Corcoran stated. “And that’s how they got out of the truck after the collision, by knocking that plastic bag out and trying to get out.”

She was accused of cruelty to minors, domestic violence, criminal neglect of family, and child delinquency promotion in 2015. According to arrest records at the time, her nine children were all sleeping on the floor in one room. There were no beds in the home.

In 2016, she was arrested and imprisoned at the East Baton Rouge Parish Prison before being released later that year.

Brothers is charged with 11 charges of cruelty to a kid, 11 counts of not restraining a minor, negligent operation, and driving without insurance. Brothers did not have a driver’s license, according to Corcoran, therefore she is additionally charged with having a suspended Class P driver’s license.