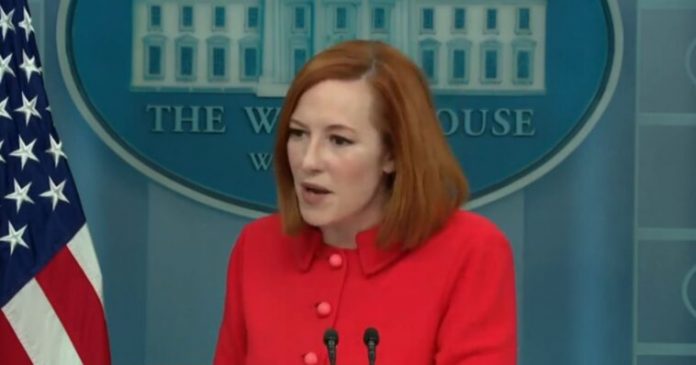 Jen Psaki, the White House press secretary, has been handed the onerous responsibility of defending the Biden administration’s endless hypocrisy to a public that has had enough of it. It’s no surprise that she’s leaving for MSNBC.

Psaki was questioned on Monday about Vice President Harris being discovered visiting a children’s school with many youngsters still disguised, and she said it was an emotional day.

“On the issue of the vice president and the masking, a couple of times you’ve cited an emotional day, an important day, an important role she was playing. You’re not saying that those things are reasons to not follow CDC guidance?,” a reporter asked.

Psaki replied, “Absolutely not. And I appreciate your question on that. What I was conveying is that, you know, well, she has worn a mask, as is protocol, and as is our expectation of everyone from the Vice President, the President, all of us on down if you have a close contact, that there was a photo as Jackie said, and there are moments when she was human, and she didn’t have a fat mask on in a photo, but she has worn the mask. And certainly that is what we want to convey to the American people.”

She went on to say that she believed it was a spur-of-the-moment choice.  But it doesn’t mean we don’t all strive to be model citizens here and follow the CDC guidelines on requirements. She further conveyed that the Vice President tested negative.

Meanwhile, here he is at a party, maskless 👇pic.twitter.com/W4PZbrMMT6

Dr. Nicole Saphier chastised New York City Mayor Eric Adams on Monday for his adamant, illogical insistence that children in daycares and pre-K schools throughout the city wear masks while adults like him don’t.

“It’s important to remember that the World Health Organization has never recommended masking children 2 to 5 years of age. In fact, they only recommend selective masking in children 6 to 12 years of age,” according to Dr. Saphier.