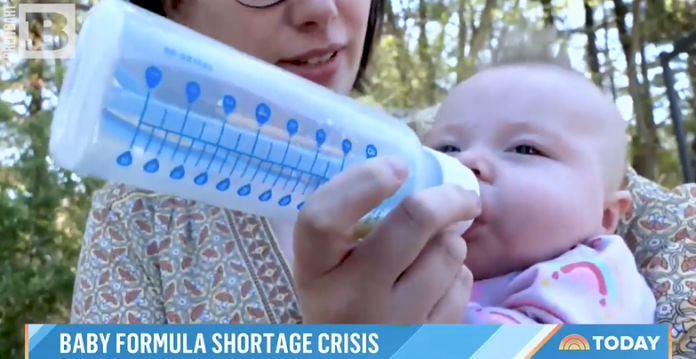 The nationwide scarcity of infant formula is wreaking havoc on low-income families and those on federal assistance programs, according to a report released on Thursday.

According to the Associated Press, desperate parents are turning to internet forums to trade and sell formulas in an unregulated market in order to feed their children.

Rep. @michaelgwaltz: Easier to Get a Crack Pipe than Baby Formula in Biden's America pic.twitter.com/zJQdyayBcp

Following Abbott’s recall of infant formula due to contamination concerns, the scarcity is wreaking havoc for lower-income families.

The recall wiped out several brands covered by the Special Supplemental Nutrition Program for Women, Infants, and Children, according to the study, which had unforeseen repercussions for people in lower income categories (WIC).

This is a government program for mothers, babies, and children, similar to food stamps, albeit it now allows brand replacements.

The Biden administration is frantically collaborating with states to make it simpler for WIC participants to purchase alternative amounts of formula that their benefits may not now cover.

According to the White House, WIC members buy around half of all baby formula sold in the United States.

Those who try to tackle the problem online may encounter issues with both supply and quality.

According to the Associated Press, parents searching for newborn formula on store websites such as Amazon and Google are being welcomed by toddler items.

Powdered toddler goat milk and plant-based milk powders are among the goods available.

One Amazon banner ad advertises organic non-GMO formula for babies and toddlers, but a closer look at the product image reveals that it is exclusively for children over the age of 12 months.

Meanwhile, as White House Press Secretary Jen Psaki informed parents on Thursday, the White House answer to the confusion is for anyone affected to just call their regular doctor.