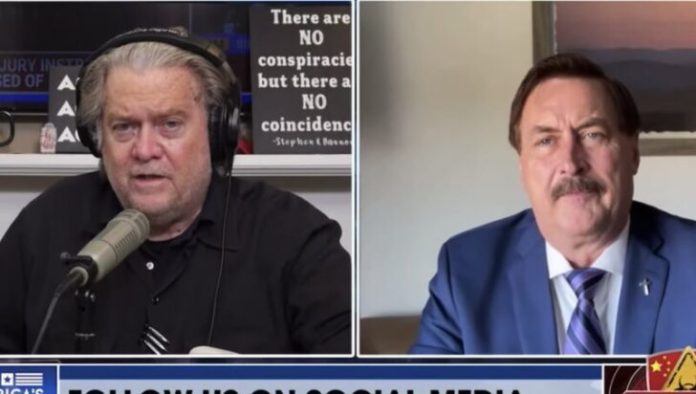 Mike Lindell, CEO of MyPillow, claims that his Supreme Court case has been delayed. He believes this is due to political reasons.

Lindell informed Steve Bannon on Tuesday that although state attorneys general had stated they would sue for the lawsuit, no filings were made as of Tuesday afternoon.

Bannon was also informed by Lindell that the details of the lawsuit would become public on Thanksgiving Day, during a 96-hour conference call.

“We’ve been flying for the past few days and it’s been very chaotic,” Lindell told Bannon on Real America Voice.

“We have a full copy of the complaint with any changes they need and we’ll have a great update for you… This is history. I have seen the complaint. It is epic,” he added.

You can watch the entire interview below.

“I have met many AGs,” added Lindell. “I was on the phone with four of them yesterday and some of them have a lot going on right now that last Friday they gave them until today to fight their responsibilities. where children have to be vaccinated.”

“You know a lot of things are going on out there that are very suspicious,” explains Lindell.

“It’s like herding cats. You have different ones in different levels. I have some – a couple – that I don’t want to publish right now and frankly we won’t do it. “

Let’s all hope Mike Lindell’s case gets heard by the Supreme Court so that we can get an answer about what actually happened in the 2020 elections.