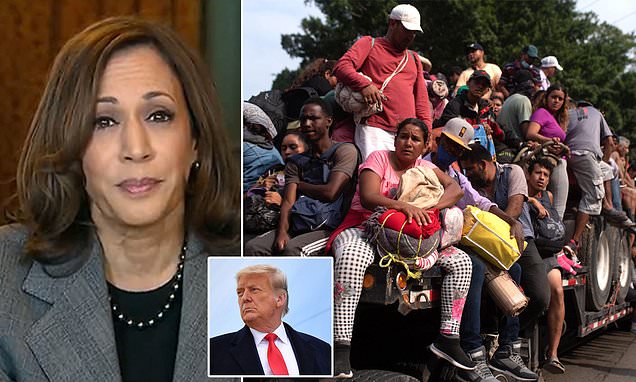 In a recent address by the border czar, Vice President Kamala Harris blamed Trump for the current immigration crisis.

According to The Daily Mail Online harris stated that Trump’s “broken” immigration system was the result of a reported 128% increase in migrants crossing the border between October and last year.

ABC’s George Stephanopoulos questioned Harris, the president’s point person for root causes of immigration, about the record number of illegal border crossers. “What are you doing to turn that around? How long will it take?”

“It’s not going to be overnight,” the vice president conceded. “We can’t just flip a switch and make it better.”

“We inherited an immigration system that is deeply broken,” she added.

Republicans however claim a different story and cite the sharp decline in illegal immigration under the Trump administration to prove that republicans’ increased cooperation with ICE was a wise step.

Some of the controversial policies that President Joe Biden & Vice President Kamala Harris rescinded include the “Remain In Mexico” policy and the loosening of ICE’s grip on local enforcement of illegal immigrants.

Harris says that although migrants may not want to leave their country, they are driven by dire conditions in Central and South America to travel.

She was blunt in her negative response to being asked if she feels she is being “underutilized” by Biden.

“No. I don’t,” she told Stephanopoulos in an interview that aired on Good Morning America Thursday morning.

“I am very, very excited about the work that we have accomplished but I am also absolutely, absolutely clear-eyed that there is a lot more to do and we’re going to get it done.”

Harris’ interview was broadcast as Harris claims that Harris is having a difficult relationship with Biden.