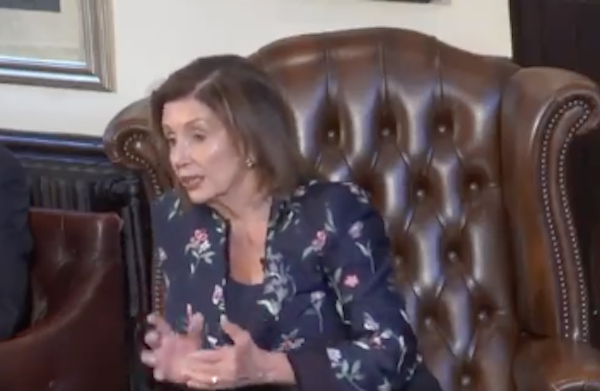 Nancy Pelosi, Speaker of House, thought it was a great time to criticize Trump supporters overseas while representing the United States abroad.

As she tried to divide America and turn the tide against Trump’s supporters, the speaker called the 80 million Trump supporters a “cult”.

“It is a privilege to join my G7 colleagues in the United Kingdom to discuss a top priority for legislatures and governments across the world: how to balance security and openness, particularly in light of challenges from the coronavirus pandemic, cyberthreats and terrorism,” stated Nancy Pelosi. “Public access to the workings of government is a cornerstone of democracy, and it is therefore imperative that parliaments and legislatures remain as open and transparent to the public as possible. We need to hear from – and be accountable to – those we are privileged to represent, as we work to deliver results in their lives.”

“I say to my Republican friends, and I do have some,” Pelosi said with a laugh. “Take back your party. You’re the grand ole party of America. You’ve done wonderful thinks for our country. You have now been hijacked by a cult that is just not good for our country. Take back your party. Don’t let it be dominated by those who want to suppress the vote because they do not have a positive message to win. They want to suppress the vote and that is how they would win.”

In the UK, @SpeakerPelosi calls Republicans “cult” members and says the GOP is bad for America pic.twitter.com/Z76TtdfIvm

In recent weeks, Pelosi has increased her message to Republicans. Are you trying to bring the old, weak, and swamp-ridden Republican party back, Speaker?

“I say to my Republican friends, take back your party. The country needs a big, strong Republican Party. And I say that as a leader in the Democratic Party,” Pelosi stated.

Pelosi claimed that the Republican party of today is just an extreme right section full of “cult” personalities.

“Don’t have it be a cult of personality on the extreme, extreme, extreme right,” she stated. “This isn’t about liberal or conservative, it’s about radical…uh…shall we say, they don’t believe in governance.”