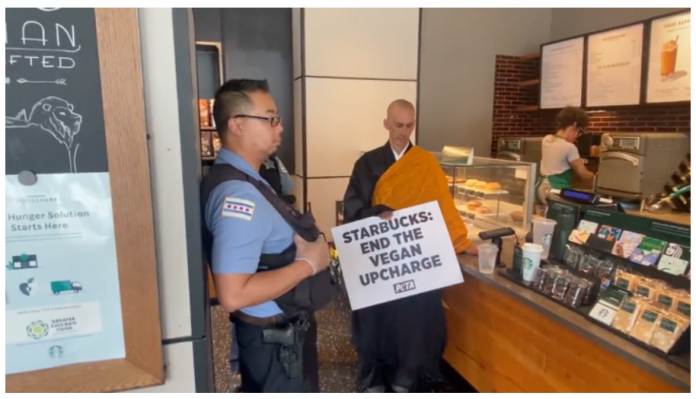 On Wednesday morning, police in Chicago, Illinois, detained two persons for gluing their hands to a Starbucks store counter in the city’s Loop.

People for the Ethical Treatment of Animals protesters bonded their hands to the Starbucks counter, asking that the coffee shop cease charging an additional price for plant-based milk products.

Starbucks at 200 S Michigan is closing right now due to a protest by PETA.

According to a representative for the Chicago Police Department, two guys, ages 31 and 42, were detained around 10:15 a.m. as a consequence of the incident.

According to authorities, there were no injuries.

“We respect our customers’ rights to respectfully voice their opinions so long as it does not disrupt our store operations.” a Starbucks representative stated.

The demonstration on Wednesday is identical to one held in New York City on May 7 by actor James Cromwell.

Cromwell was arrested after supergluing his hand to a counter at a Midtown Manhattan Starbucks in protest of the company’s policy of charging more for non-dairy milk items. PETA’s Facebook page broadcasted the demonstration live.

The price rises, according to PETA Vice President Tracy Reiman, are harmful for the environment.

According to PETA Executive Vice President Tracy Reiman, Starbucks’ punitive price rise on vegan milks is terrible for cows, bad for the environment, and awful for lactose-intolerant consumers, many of whom are people of color. PETA will stick to Starbucks like glue until the company agrees to eliminate the vegan premium.