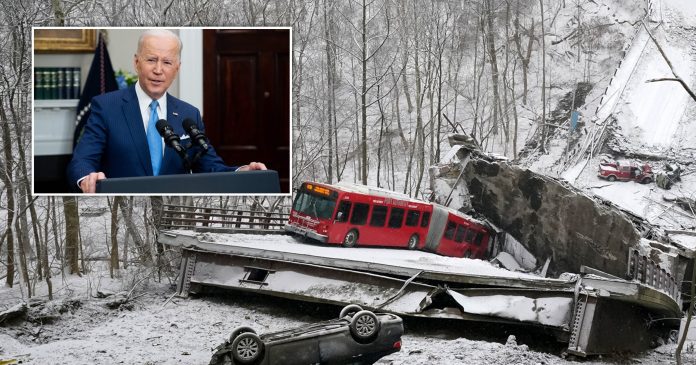 A two-lane bridge in Pittsburgh collapsed early Friday. Rescuers had to rappel 150 feet, while others created a human chain to rescue many people from the bus.

It happened just hours before President Joe Biden visited the city to push for his $1 trillion infrastructure bill. This includes bridge maintenance.

“@POTUS  has been told of the bridge collapse in Pittsburgh,” White House press secretary Jen Psaki tweeted. “Our team is in touch with state and local officials on the ground as they continue to gather information about the cause of the collapse.”

“@POTUS is grateful to the first responders who rushed to assist the drivers who were on the bridge at the time,” she added in an ensuing tweet. “The president will proceed with trip planned for today and will stay in touch with officials on the ground about additional assistance we can provide.”

Authorities said that there were only minor injuries, but no deaths and they also stated that drones were being flown to ensure no one was under any collapsed sections.

Police reported that the span was on Forbes Avenue, over Fern Hollow Creek, Frick Park, and fell just before 7:01 a.m.

One photo of the scene showed a commuter bus standing upright on top of a section collapsed bridge.

An KDKA television photograph showed many vehicles piled up in the rubble at the bottom of a wooded valley.

Officials from the city claimed that the collapse was caused by a gas leak, but the gas has since been turned off.

Darryl Jones, Chief of the Pittsburgh Bureau of Fire, stated that at least three to four vehicles were involved in the crash. There were 10 minor injuries and three were taken to the hospital. Jones stated that none of the injuries were serious.

“It sounded like a snow plow,” a witness told KDKA, calling the timing on the day of Biden’s visit “an amazing coincidence.”

The Democrat president will visit Mill 19, a former steel plant building that is now a research and developmental hub. He will then hail the U.S.’s strong recovery after the pandemic, according to the White House.

“The president will talk about the remarkable economic progress we’ve made over his first year in office — including the fastest single year of job growth in American history, the biggest unemployment drop on record and, as we learned on Thursday, the fastest economic growth in 2021 in almost four decades,” a White House official said.

Biden will be returning to the location of his first campaign event of 2019, and will highlight the creation of 367,000 manufacturing job since he assumed office one year ago and the passage of a 1 trillion infrastructure bill — a rare bipartisan win in a deeply divided U.S. Congress.

According to the official, the president will also talk about his efforts to rebuild American competitiveness to beat China in a race for dominance of the global economy.

General Motors stated that it would invest $7B in Michigan for electric vehicle production expansion, and Intel claimed it would invest up $100B to create a Ohio chip-maker.