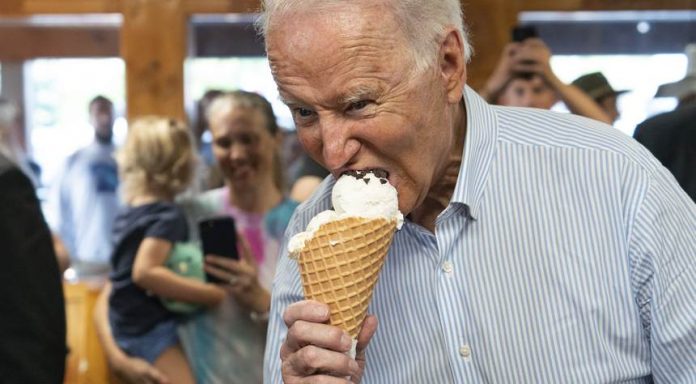 Inflation is at an all-time high, the worst in forty years. As if we were the Soviet Union, people remark about the bare shelves they observe in grocery stores. Russia and Ukraine could be on the verge of a conflict. Illegal aliens are pouring in at an unprecedented rate, with the worst December statistics in history.

So, what is Joe Biden doing in the midst of all of this chaos? Isn’t he working on these issues 24 hours a day, 7 days a week to try to solve the problems? Well, not quite. Remember, this is Joe Biden. Because he packs it in early so often, he helped us comprehend what the expression “calling a lid” meant. He also spends his weekends in Delaware on vacation.

One of the reporters questioned White House Press Secretary Jen Psaki about Biden’s absence from the “PDB,” or Presidential Daily Briefing. Psaki was caught off guard by the question. Count the “ums” and “uhs” as she tries to come up with anything to say as she tries to excuse what he’s doing.

The reporter asked “Can you shed any light on how he’s spending his day?”

“Well, let’s see, um, this morning I think he had some policy meetings, uh, also a PDB meeting,” Psaki responded. “Uh, he, um, later this afternoon, uh, I think is doing some remarks review. There’s some days that we spend some time doing internal meetings and discussions, uh, with policy experts, with policy leaders, um, and that’s that’s what’s happening today. He would say he doesn’t have nearly enough time on his schedule because it is packed whether people see him or not.”

Jen Psaki struggles to explain why Biden’s schedule is so empty today. pic.twitter.com/Xh00o8jD8G

Biden burned his allowance on a Kamala mug https://t.co/gxwMMeZzLc