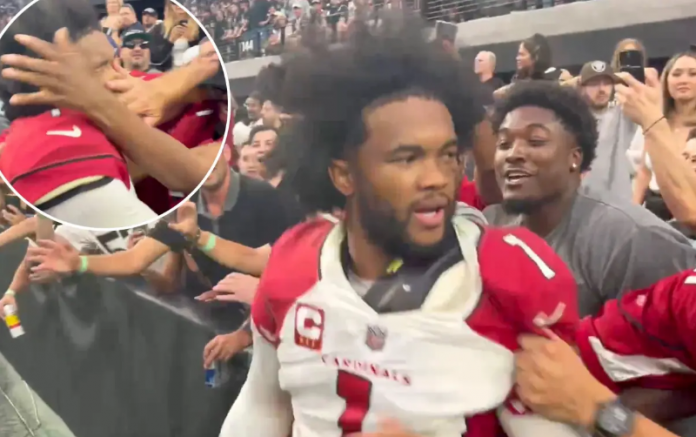 Kyler Murray was hit in the face in an incident that the police are looking into.

The Cardinals were celebrating on the field on Sunday after stunningly defeating the Raiders in overtime at Allegiant Stadium in Las Vegas. Murray walked to the front row behind one of the end zones and delivered high fives to Cardinals supporters seated there.

After these high fives, a fan, most likely a Raiders fan, can be seen in a video attempting to smack Murray in the face.

Turning around, Murray faced the offending group of spectators. To diffuse the situation, teammates stepped in between Murray and the spectators without delay.

A battery complaint was filed, Las Vegas police spokesman Larry Hadfield told the Associated Press. He did not mention Murray by name, but he did confirm that a stadium patron struck a professional football player according to the allegation.

The stakes were extremely high because both the Cardinals and the Raiders came in with zero points. Starting the NFL season with a 0-2 record truly throws clubs behind the eight ball, whereas a 1-1 record is fairly salvageable.

Prior to Murray going into video game mode and directing two touchdown drives finished with two-point conversions to tie the game, the Raiders held a 23-7 lead early in the fourth quarter.

When Hunter Renfrow fumbled the ball, Byron Murphy recovered it and returned it for a 59-yard touchdown, giving the Cardinals the victory in OT.