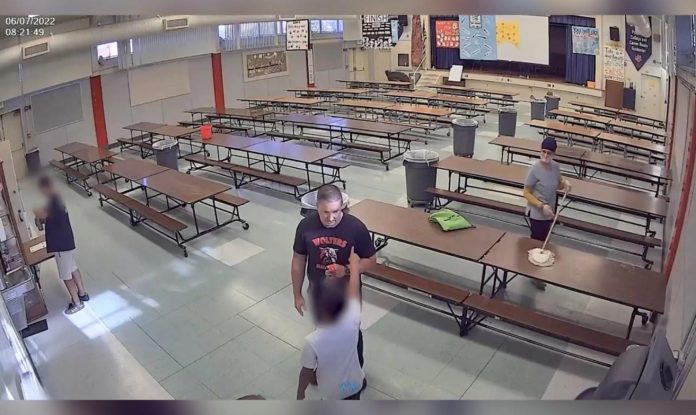 Following the release of a video showing a former elementary school administrator in Central California appearing to push a youngster to the ground, he is now being charged with cruelty to a minor.

On June 7 in Fresno, California, at breakfast time, former Wolters Elementary School Principal Brian Vollhardt is seen pushing a student in the chest, causing him to tumble to the ground.

The principal decided to violently shove the furious special needs student down rather than defusing the issue, according to the Fresno Unified School District, as Vollhardt and other staff members interacted with him.

Bob Nelson, the superintendent of the school district, referred to Vollhardt’s acts as disgusting and categorically not acceptable at any level inside Fresno Unified.

According to the district, the event has been reported to Child Protective Services as well as the police.

The incident was reported to authorities on June 9, according to Fresno Police Chief Paco Balderrama, but he was only made aware of it on September 6—nearly three months after it happened.

“I can tell you as a police chief in this community, I have a real problem as to the way that this child was treated. As a parent of a 9-year-old kid, which is a very similar age to the victim in this case and who also suffers from anxiety and doesn’t always handle situations in the best way, it is troubling as to how somebody who is supposed to protect this child and provide support, treated them,” Balderrama stated.

On September 26th, Vollhardt is due to be arraigned on a misdemeanor allegation of deliberate cruelty to a juvenile.