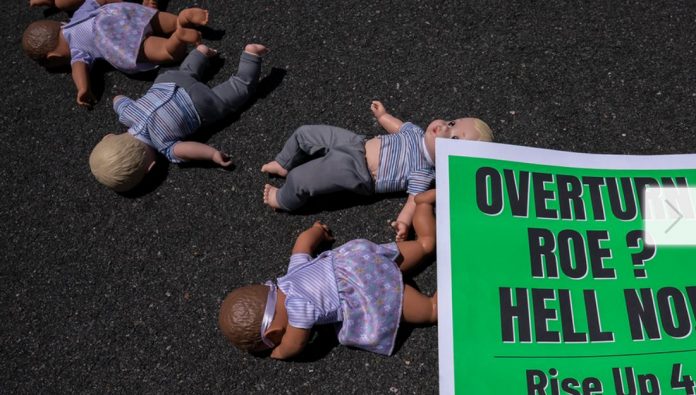 On Saturday, members of the organization Rise Up 4 Abortion Rights carried placards outside Barrett’s home in Falls Church that said, “Abortion on demand and without apology,”

The demonstrators were equipped with baby doll props and wore trousers that seemed to be saturated in blood to depict a future of forced births if Roe v. Wade is overturned by the Supreme Court.

We aren't incubators! Youth procession delivered baby dolls to Amy Coney Barrett. We aren’t protesting to change the minds of women-hating fascists.We're calling on the pro-choice majority, on YOU, to get in the streets to STOP #SCOTUS from overturning Roehttps://t.co/Y0oCPlHcsr pic.twitter.com/nkHT7iamHO

Protests have been held at Dodger Stadium, the Supreme Court, and other venues by members of the group Rise Up 4 Abortion Rights.

Other pro-choice activists linked to the extreme abortion organization “Jane’s Revenge” have claimed responsibility for recent attacks on pro-life pregnancy facilities around the country.

“We will never stop, back down, slow down, or retreat. We did not want this; but it is upon us, and so we must deal with it proportionally. We exist in confluence and solidarity with all others in the struggle for complete liberation,” Jane’s Revenge members said in a letter last week.

“Our recourse now is to defend ourselves and to build robust, caring communities of mutual aid, so that we may heal ourselves without the need of the medical industry or any other intermediary. Through attacking, we find joy, courage, and strip the veneer of impenetrability held by these violent institutions.”

The letter claimed responsibility for assaults in Oregon’s Portland, Eugene, and Gresham, as well as Washington state’s Olympia, Lynwood, and Vancouver.

Since then, religious leaders have urged the Department of Justice to investigate, punish, and publicly denounce the attacks.