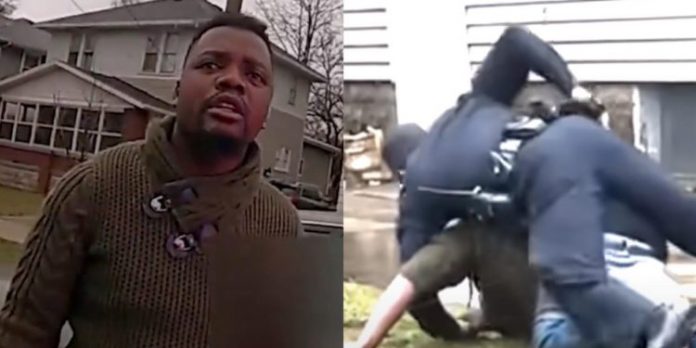 Protesters in Grand Rapids, Michigan, went to the streets after police released footage on Wednesday showing the shooting death of a black man after a scuffle with an officer during a traffic stop.

Patrick Lyoya, 26, was stopped on April 4 when a police officer noticed that his license plate did not match the vehicle he was driving.

While the body camera film did not capture the moment of Lyoya’s shooting, a passenger in the car captured it on their smartphone, which was also published.

The cop is seen kneeing the man in the back while shouting at him to release grip of the stun gun in the disturbing footage from his smartphone. After a few minutes, the cop pulls out his revolver and fires a single shot.

Activists were outraged that Lyoya was shot in the back of the head from behind, claiming that this demonstrates the cop acted unlawfully.

The officer involved in the incident has yet to be named or prosecuted, awaiting the outcome of the inquiry. He’s been on the force for seven years.

Some businesses in the city shut down for the day and sent staff home in anticipation of the demonstrations.

Chris Becker, the prosecutor, warned the public against jumping to conclusions based on the minimal information given.

Lyoya was born in the Democratic Republic of Congo and grew up there.

The autopsy of Lyoya had been finished, but the results of the toxicological testing had not yet been disclosed, according to the county’s medical examiner.