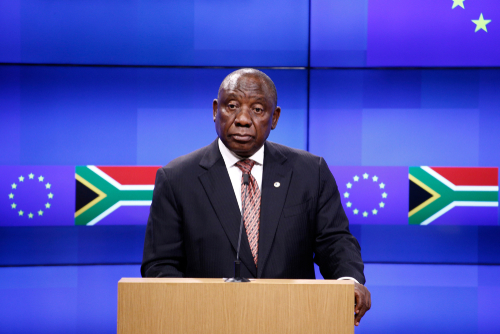 The current South African president, Cyril Ramaphosa, has blamed NATO for the situation in Ukraine.

He stated that he would refuse requests to criticize Russia, raising issues about whether he could be considered as a middleman by either the West or Ukraine.

Ramaphosa said during a question-and-answer session in parliament that the violence could have been avoided if NATO had heeded warnings from within its ranks over the years that its expansionism would lead to more, not less, turbulence in the region.

South African President Cyril Ramaphosa blamed NATO for the war in Ukraine and said he would resist calls to condemn Russia, in comments that cast doubt over whether he would be accepted by Ukraine or the West as a mediator https://t.co/y1plRKUHRG pic.twitter.com/7tr3pvDS3M

He went on to warn that South Africa could not accept the use of force or the violation of international law, a clear reference to Russia’s invasion of Ukraine on February 24.

Both sides unanimously support Russia and Ukraine in maintaining the momentum of peace talks and resolving disputes through dialogue and negotiation. pic.twitter.com/U5C44v4sR8

South Africa’s president stated that he had not yet spoken with Ukraine’s president, Volodymyr Zelenskyy, and that he desired to do so.

Ramaphosa announced on Friday that South Africa has been asked to arbitrate the conflict between Russia and Ukraine. He didn’t say who approached him and asked him to intervene, and he didn’t say why.

Throughout the Cold War, this provided anti-apartheid militants with training and support.

As a result, Russia’s western foes generally regard South Africa with suspicion.

This is despite the fact that, since its peaceful democratic transition in 1994, it has maintained a high level of diplomatic power in comparison to its economic strength.