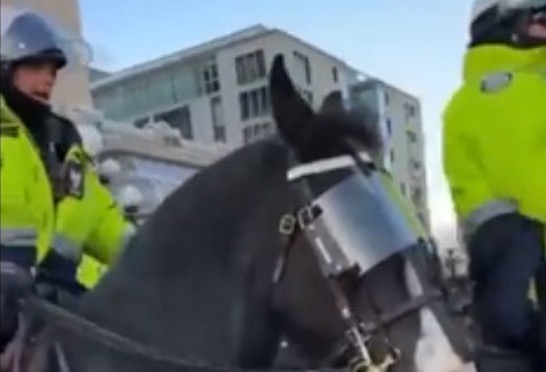 Only a few days ago, the Canadian government declared that the remaining peaceful demonstrators supporting the Freedom Truckers will be subjected to a police operation.

On Wellington Street and other sites in Ottawa’s downtown core, a police operation is scheduled to take place. Speaker Anthony Rota of the Parliamentary Protective Services (PPS) says (PPS).

Remember this image. Remember what Trudeau did to Canada. pic.twitter.com/Z5b3kfWK1y

According to reports, two demonstrators were trampled by police horses during the charge.

The public was misled by Ottawa police, who justified the trampling of demonstrators by claiming that someone threw a bicycle at the police horses with the intent of injuring a police service animal.

In reality, they trampled an elderly woman with a mobility scooter. On a now viral video, you cannot see a bicycle being thrown, as they claim.

Although the Canadian government issued a statement reminding everyone that safety is vital, the statement also acknowledged that the police activities will have an impact on the downtown center.