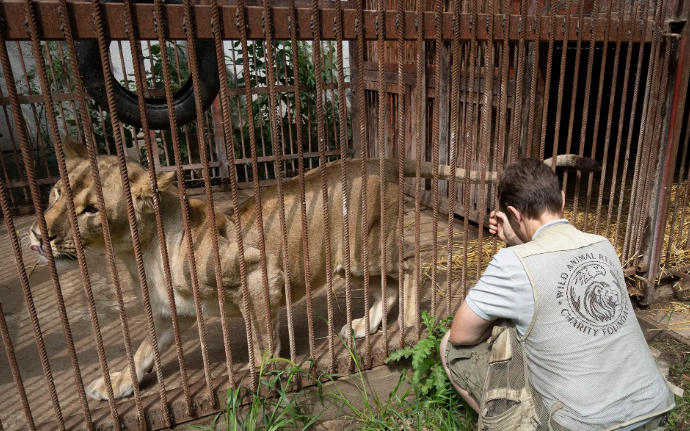 Natalia Popova has discovered a new calling in life: saving pets and wild creatures from the destruction caused by the conflict in Ukraine.

The 50-year-old is holding a light-furred lioness like a kitten. The animal, who is contained, smiles at the attention, lays on her back, and extends her paws up toward her caregiver.

More than 300 animals have already been rescued from the conflict by Popova in collaboration with the animal welfare organization UA Animals; 200 of them were sent overseas, and 100 found new homes in the western, more secure region of Ukraine. Many of them were wild animals that had been domesticated as pets before their owners escaped the Russian missiles and bombardment.

133 animals are currently housed in Popova’s refuge in the Chubynske hamlet of the Kyiv area. In addition to tame animals including horses, donkeys, goats, bunnies, dogs, cats, and birds, the menagerie has 13 lions, a leopard, a tiger, three deer, wolves, foxes, raccoons, and roe deer.

The animals in Poland’s quarantine were saved from conflict zones including eastern Ukraine’s Kharkiv and Donetsk areas, which are frequently bombarded and the scene of ongoing hostilities. She has many lives, like a cat, according to the Ukrainian troops who alert Popova when animals close to the battle lines require assistance.

On her journey to save another wild animal, she frequently trembles while driving.

“I feel very sorry for them. I can imagine the stress animals are under because of the war, and no one can help them,” Popova remarked.

Popova traveled alone to combat hotspots during the first several months of the conflict, but lately a couple from UA Animals offered to transport and assist her.

The animal refuge is only a pit stop for them. Popova treats them humanely before finding them new homes. Although she claims to have a particular bond with each huge cat, she doesn’t mind letting them go.

To help her evacuate them and find them new homes, she sends all of her animals to the Pozna Zoo in Poland. Animals have already been shipped to South Africa, France, and Spain. This week, she will send 12 lions to Poland as her next endeavor.

Popova is aware that she will still be required because there is no end to the combat in sight.