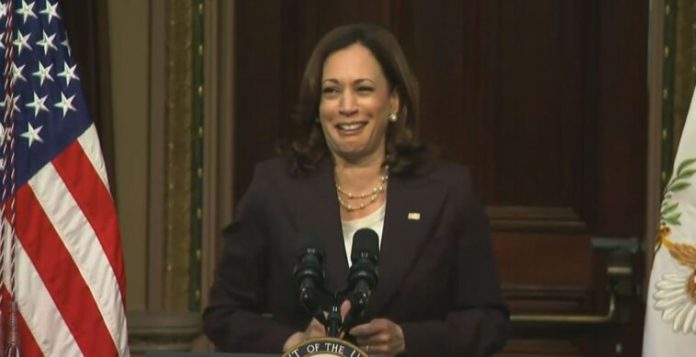 Vice President of the United States Kamala Harris spoke to the nation on Wednesday about the ostensibly grave threat faced by climate change. She couldn’t stop herself from giggling in the middle of her speech.

The vice president then addressed the problem of droughts and water shortages, which have disproportionately affected Californians owing to government mismanagement.

She said, we have seen the terrible cost of the climate crisis across the West. She added that she had visited many of the sites where wildfires had occurred, where people had lost their homes and loved ones, and where entire villages had been destroyed. She has spoken with and met with firemen. Her brother-in-law works as a fireman in California, she added. Many of them perform 24-hour shifts in some of the most hazardous environments imaginable to keep us safe.

“Farmers and agricultural workers who have lost their livelihoods because the rains have simply failed to arrive,” she continued. “And communities that have seen firsthand how water scarcity has an economic impact, driving up prices and creating a real sense of urgency about the lack of opportunity that results.”

Nevertheless, Harris is indulging in some historical revisionism. Timber buildup in old growth forests, which later ignite in large flames, is the most significant contributor to wildfires in California. In a Forbes article published in 2020, Michael Shellenberger, author of “Apocalypse Never,” effectively argues that people should stop blaming climate change for California’s fires.

The facts, on the other hand, don’t bother Kamala Harris, a politician who has a long history of holding California aloft as a stark warning about cataclysmic climate change.

California is well-known for its water mismanagement. It grew so terrible that the city of San Francisco sued the state’s Water Board at one point.